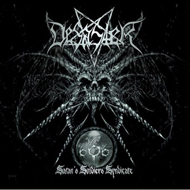 There is a reason why Germany's DESASTER took their name from DESTRUCTION's "Total Desaster" way back in 1988. They knew then as they know now that Germany's thrash movement was something special and continues to be so. The sound emanates from deep within the fires of Hell, the riffs melting flesh, breakneck tempos cause the nervous systems of the non-believers to shut down, and listeners can almost smell the smoke rising from the ashes left after the country's Teutonic terrors are through. It is that very same spirit that one hears on "666: Satan's Soldiers Syndicate", the band's sixth studio album. This is indeed what is meant when folks talk about "blackened thrash."

Taking equal portions from the dirtiest thrash and the most savage black metal, "666: Satan's Soldiers Syndicate" works because the music is played from the heart. Bullet belts, well worn leather, and hair that hasn't been washed for days go hand in hand with whiplash anthems like the soul scarring title track and an unashamedly staunch tribute to true black/thrash warriors everywhere called "Hellbangers". Speaking of the latter cut, it's a fine example of what it means to say it like you mean it and those with a hankering for flowery poetry can simply fuck right off: "The message from hell is casting a spell / with demons in the back we're ready for attack / leather and beer / posers will fear / this is the night of Hellbangers." If you find it all too silly, then you probably weren't a fan of classic thrash in the first place. Though "thrash" is used liberally in this review, one must not forget the blackened part of the formula, as it oozes out all over the place. Yet the riff on the speed burning "Venomous Stench" is about as vintage 80's thrash as it gets.

The album doesn't suffer from too many coats of studio gloss either. The playing is loose and the recording gives one the feeling of a live performance, a feat that so many bands never seem to full realize nor truly understand. Finally, guest appearances from PRIMORDIAL's A.A. Nemtheanga and ABSU's Sir Proscriptor McGovern (vocals on "Tyrannizer"),and MELECHESH's Ashmedi (guitar solo on "Angel Extermination") make the effort even more metal. McGovern also wrote and composed "Intro".

On "666: Satan's Soldiers Syndicate", DESASTER makes no effort to expand the genre or experiment with their sound. It's just good old Satan lauding, beer drinking, blackened thrash. Quoting just a couple more lines from "Hellbangers", the lyrics seem to sum up the album better than I ever could. "Come on! Bang your fucking heads for the master in Hell. Break your fucking neck!"