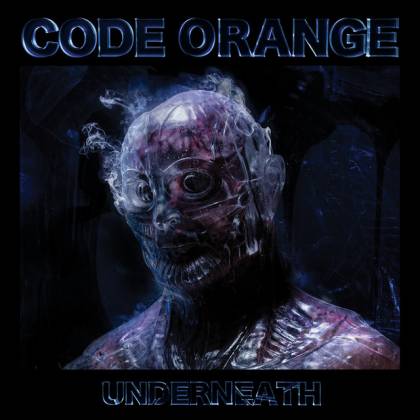 Judging by some of the full-bore plaudits it has received already, a lot of people are pinning their hopes on the new CODE ORANGE album, seemingly viewing it as some kind of epoch-shattering, great leap forward for heavy music in general. In terms of hardcore/metal crossovers, it's pretty undeniable that "Underneath" stands firmly at the cutting edge of things. As with the band's last album, "Forever", this noisily and pointedly aims to dismantle many of modern metal's clichés, replacing them with an anarchic sonic smorgasbord that, at times, owes as much to ATARI TEENAGE RIOT and VENETIAN SNARES as it does to SLIPKNOT or MADBALL.

That endearing predilection for jarring cut-ups and extreme dynamic switcheroos, all gleefully blurring the lines between organic instrumentation and electronics, is both this album and this band's most obvious USP. "Underneath" is frequently confrontational and harsh in a way that virtually no modern mainstream heavy music is, and there are numerous moments that will have you grinning at the sheer obnoxious vitality of it all. Songs like opener "Swallowing the Rabbit Hole" and "In Fear" straddle the dizzying divide between post-hardcore, deathcore, noise rock, thrash and quite possibly several other genres, and with those fiendish, synapse-flicking robot interjections repeatedly whipping the rug from under the listener's feet, it's not hard to see why mainstream metal folk are being blown away by the ferocious individuality on display. Listen to something as gnarly as "You and You Alone" at full volume, and you would have to be a graceless swine to dismiss the uncompromising way that CODE ORANGE go about their business.

The downside to "Underneath" becomes more than apparent as the album progresses and dynamic and textural shifts become more pronounced. For all their ingenuity and self-evident desire to shake things up, CODE ORANGE are also capable of being weirdly unimaginative: "Who I Am" starts off sounding like a genuine evolutionary leap, shades of MY BLOODY VALENTINE underpinning melodically askance verses, before it inexplicably switches to a perfunctory late '90s alt-metal plod for an anticlimactic chorus. It's a telling moment — the sound of eager innovation overwhelmed by traditional thinking. Elsewhere, it's apparent that no amount of abrasive digital sabotage can mitigate some rather mediocre songwriting. Both "Sulfur Surrounding" and "The Easy Way" sound like sincere attempts to score a radio hit, but the melodic payoffs are predictable; the riffs, largely forgettable. As a result, it's a relief when "Back Inside the Glass" brings things back to a more plausible state of maxed-out sonic mayhem, before the closing title track injects some menace and melancholy via shuffling electro-throb and spidery post-punk guitar.

As flawed as it is, you can feel the conviction and belief in everything that CODE ORANGE do here, and "Underneath" is undoubtedly their most distinctive and potent statement yet. At times, this is an absurdly exciting record, but at others, it's frustratingly dull and misjudged. If you're looking for this new decade's first platinum-plated game changer, this doesn't even come close. But it will make your fillings rattle, so that's something.