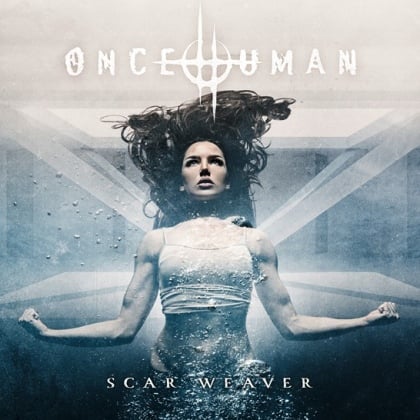 It's been a long time coming, this third album from Lauren Hart and Logan Mader's LA-based metal crew. ONCE HUMAN put out two strong albums at the start of their story, establishing a nicely eccentric groove-based sound that showcased Hart's impressive vocal talents and giving Mader some huge riffs to sink his teeth into. Both "The Life I Remember" (2015) and "Evolution" (2017) had plenty of great songs and moments of raging heaviness, but neither will have prepared anyone for the sheer, ugly enormity of "Scar Weaver". Instantly recognizable as a definitive statement, not least due to the warped but crushing clarity of Mader and fellow guitarist Max Karon's tones, the third ONCE HUMAN album spits, snarls and lashes out with the venom and vigor of a debut. Suddenly, a five-year gap between albums seems eminently sensible because this is a wholesale rebirth.

Given how many extraordinary riffs there are on this record, it would be unfair to say that Lauren Hart is the real star of the show. But the fact that the frontwoman's range, power and versatility have all grown tenfold is impossible to ignore, from the opening rampage of "Eidolon" onwards, Hart roars, wails and sings with the conviction of someone who truly feels they have found their voice. Meanwhile, ONCE HUMAN are blurring the lines between the balls-out groove metal of old, and something sharper, spikier and more in line with the tech-metal and modern death metal scenes. With Hart's volubly enhanced bellowing slamming every musical point home, this newly refreshed hybrid sounds both fresh and ever-so-slightly terrifying. When MACHINE HEAD's Robb Flynn surfaces on recent single "Deadlock", the amount of pugnacious attitude coming from both vocalists is a wonder to behold.

Nonetheless, the most important reason to blast "Scar Weaver" at top volume is that Karon and Mader have conjured a dizzying splurge of truly repugnant and unhinged riffs here. Songs like the title track and the grimly moody "Where The Bones Lie" are relentlessly headbang-worthy, but there is none of modern metal's cozy sterility on offer. Instead, these are riffs honed to elicit as much queasy dread as possible, with Hart permanently on hand to anchor the whole thing to mortal reality. In fact, someone should give this band some kind of trophy for the utterly disgusting riffs ONCE HUMAN use during "Deserted", an obvious standout on an album with no discernible low points. Similarly, "We Ride" is almost absurdly brutal and hammers home how uncompromising this band have become: just under three minutes of flat-out speed metal insanity, with inspired melodic interjections from Hart and a palpable sense that getting out of the way of this runaway steam-train might be a sensible idea. At the other end of dynamic scale, hints of OPETH-like progginess enable the anthemic "Only In Death" to provide "Scar Weaver" with a disarming and wildly evocative grand finale.

Not just their best album but a commanding and convincing statement of renewed intent, "Scar Weaver" is heavier, nastier and more twisted than anyone might have expected, its creators included. More scars incoming, it seems.