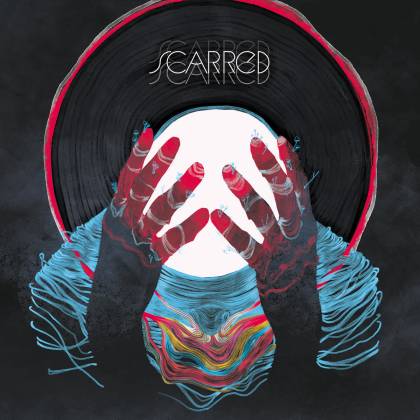 It's not just the usual territories that are producing admirable amounts of forward-thinking heavy music these days. Lots of remarkable things have been emerging through France's excellent KLONOSPHERE imprint, as founded and perpetuated by members of French prog crew KLONE, over the last few years, and Luxembourg's SCARRED may be the finest among them.

If you're anything like me, you will have completely missed the band's first two albums at the time, but then with its self-titled swagger and air of creative fervor, "Scarred" has all the hallmarks of a monumental debut record anyway. In truth, the band's earlier works (2009's self-released "New Filth Order" and 2013 Klonosphere debut "Gaia-Medea") were firmly rooted in a distinctively French strain of groove-driven death metal, both in thrall to a post-MESHUGGAH world and spiritually linked to the '90s underground that spawned it. In contrast, "Scarred" is a mature and sophisticated affair, nose-deep in progressive ideas and entirely liberated from the shackles of traditional extreme metal. SCARRED can still slam, grind and groove with the best of them, however, and thus their third full-length covers an incredible amount of musical ground, with everything seamlessly sewn together into a grotesque but frequently fascinating whole.

When SCARRED go for the throat, they have a particularly precise and syncopated way of doing things: after a trippy instrumental intro, burly opener "Mirage" erupts with a blaze of staccato riffing, all scratchy harmonics and broken picks. It mutates several times through its six-minute duration, riffs jabbing and scything from all directions, and with a subtle but unmistakable haze of proggy ambience gluing everything together. Similarly, "Chupacabra" is a riot of angular riffs and ankle-threatening kick-flurries, but it never quite reverts to generic type, veering off in unexpected directions while delivering a fearsome punch. In contrast, "A.D…Something" harnesses bilious doom and forces some almost-traditional riffs through the SCARRED prism of wonkiness, leading to something that sounds simultaneously fresh and primitive.

"Nothing Instead" pulls off a similar trick, with inevitable shades of early GOJIRA colliding with death metal squall and ghostly atmospherics. Meanwhile, "Merry-Go-Round" is a strutting, alt-metal gem, with a big, bold chorus, some neat rhythmic tics and an infectious, stuttering groove; "In Silent Darkness" is an immersive prog metal reverie, replete with bewildering, time signature sleight of hand and throbbing, space rock interjections; most startling of all, the eight-minute "A.H.A.I.A." lets rip at full-bore black metal pace, grimness faders firmly in the red and vocalist Yann Dalscheid screeching like a man with his balls nailed to a fence. As it evolves, the riffs slow to a meaty, mighty pace, before a truly mesmerizing downward spiral through cavernous, post-metal and arcane, ghoulish mantras, dark melodies woven through that jagged, riff-hewn core. After that, the slightly less unhinged "Dance of the Giants" serves up another overwhelming glut of riffs, while "Petrichor"'s bittersweet canter reveals a hitherto unheard melodic thrust to the SCARRED formula. Like everything else on this often-audacious record, it belongs firmly in a musical world that we all know and love: it's just that they do things slightly differently in Luxembourg. Perhaps we could all move there. Just an idea.