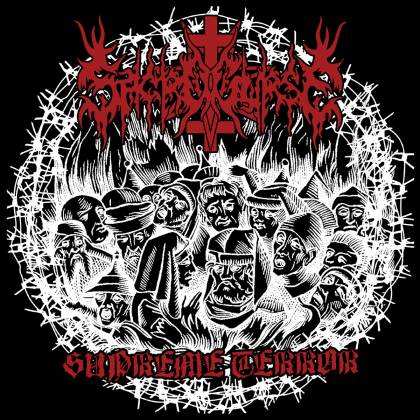 The mighty SACROCURSE has been spewing evil, dark metal since 2012. Band leader ZK, however, has been kicking out the evil jams since the early nineties with Mexico's UNHOLIER. What's more, he has also performed with the likes of MORBOSIDAD, NODENS and Russia's PSEUDOGOD. But in more recent times, the prolific artist has moved forward with SACROCURSE, having churned out a couple of full-lengths and other assorted releases. And now, the demonic act returns with an absolute banger of an EP titled "Supreme Terror".

While "Supreme Terror" is a brief affair, SACROCURSE makes it count with a succinct delivery, extreme purpose and formidable intent from its onset through to its conclusion. Clocking in at roughly 17-minutes long, the EP's four songs are as raw as an open flesh wound yet desirably audible, and they're as hook-laden and memorable as they are vile and coarse. In the overly saturated global death and black metal scene, SACROCURSE rises to join the cream of the crop because of their focus on quality songwriting.

A triumphant, battle-ready, cinematic intro — a sample seemingly pulled from decades-old cinema — starts things off dramatically on opener "Herethical Catharsists", prior to ZK belting out a Tom Araya-like falsetto that morphs into bowel-deep belching leading the charge amidst a fracas of blast beat battery and unholy riffing. Tracks like "Man Became Cursed" and "Temple is Open" march forth with the trappings of war metal. And yet these blackened death metal songs are also boldly epic in the vein of classic eighties metal. The spirit of pre-"Reign in Blood"SLAYER rears its ugly head throughout, but not so overtly.

The likable histrionics of death and black metal prominent throughout SACROCURSE's sonic delivery aren't new by any means, but the pieces of the puzzle are encompassed in a unique and distinct manner that they can call solidly their own. Hopefully the unit will be able to bring its madness to the stage again sometime soon, as the band makes maximum impact in the live arena. In short, SACROCURSE isn't the most widespread name, but black and death metal fans would be wise to check them out, and "Supreme Terror" is a fantastic starting point.