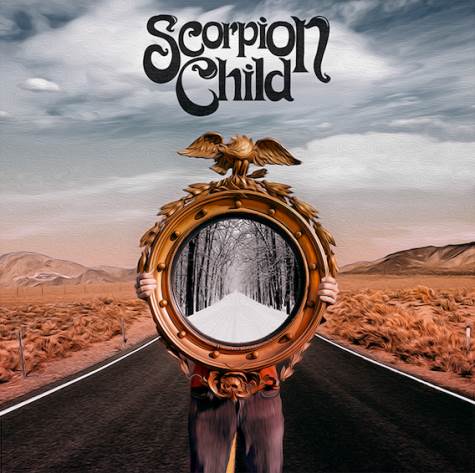 This eponymous debut from Texan quintet SCORPION CHILD surely ranks among the most head-scratching LPs of 2013, maybe the entire decade thus far.

Why? Because it's so damn hard to fathom WHAT heavy metal category to file the band under: trad, retro, stoner, groove - heck, even '80s hair metal springs to mind, at times - like some kind of headbanger morality test, nagging one to distrust that gut feeling insisting everything will actually be just fine in the morning.

Which is another way of saying you'll probably need several listens to solve SCORPION CHILD's riddle; but given some effort, you'll be glad you did.

Maybe the only thing about the band's sound that becomes clear pretty quickly is that LED ZEPPELIN is by far their biggest influence - it's written all over Aryn Jonathan Black fearless howls, guitarists Christopher Jay Cowart and Tom Frank's bombastic attack, and even the rhythm section's self-propelling grooves, which typically see drummer Shawn Alvear playing behind the beat like his life depends on it.

Thus we come upon highlights such as LP opener "Kings Highway", which is a bluesy slow-burner, well suited to easing listeners into the program; "The Secret Spot", which sounds like "Too Fast for Love"-period MOTLEY CRUE minus the sleazy bits; "In the Arms of Ecstasy", which worryingly starts like disco before delivering one of the album's catchiest sing-alongs; and "Red Blood (The River Flows)", which proves to be an anthemic power ballad BLUE MURDER might have come up with back in the day, had they only hung around a little while longer.

Other tracks like "Antioch", "Paradigm" and early standout "Polygon of Eyes" find SCORPION CHILD muddling the plot even further with somewhat vague and/or impenetrable lyrics, seemingly at odds with their blue-collar musical backing; but it's not like metal heads care that much about lyrics (let's be honest),and, if nothing else, these are bound to confound and turn away any poodle rockers hanging around the backstage door.

And still, it's amazing how these diverse, oftentimes contradictory musical touchstones start coming into focus by the third or fourth listen, and assemble themselves into strange but ultimately captivating shapes one might expect of a work by surrealist genius Salvador Dali: not everyone likes it, but almost no one can look away.

So likewise, though we expect SCORPION CHILD's first effort to evoke extreme love/hate reactions from those who sample its modern brand of blues-metal ("blues-metal" - that's what they are!),sample it you must.