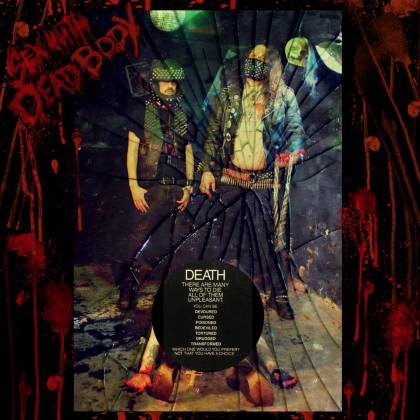 No. Redeeming. Features. Don't say I didn't warn you.

SHITFUCKER make it easy for us, really. Firstly, they're called SHITFUCKER. That should eliminate the faint-hearted and anyone that doesn't instinctively want to hear music made by the kind of people that would call their band SHITFUCKER. So that's all pretty clear. Secondly, this Motor City trio plainly couldn't give three shits what anyone thinks about all of this. And that's probably a good thing, because "Sex With Dead Body" is every bit as filthy, obnoxious and deeply, deeply wrong as you might expect from a band whose most well-known promotional photo features at least one member of the band with his penis exposed. They're called SHITFUCKER. Their previous album was called "Suck Cocks In Hell". The clues are there.

Musically, you could probably guess what SHITFUCKER sound like from a quick look at their promotional photos (penises optional). This is dirty, shambolic and almost accidentally blackened hate 'n' roll, informed by the first BATHORY album, early MOTÖRHEAD, an unhealthy dose of GG Allin and a big, contrary dollop of KISS.

Obviously, SHITFUCKER play everything like they've recently downed a gallon of cheap vodka and snorted several giant, choking lines of weed killer, but that's all part of this record's grotesque charm. They're great songs too, even if the men playing them are almost certainly a danger to themselves and everyone else. Bookended by spooky, slasher-flick instrumentals, "Sex With Dead Body" flows noisily and nastily, with maximum old-school charm, veering from the turbo-charged venom tornado of "Stab the Head" and the arcane, deathly clangor of "Ricky's Dead" to the raging hate punk of "Serial Killer" and the lobotomized, BLACK FLAG-meets-DARKTHRONE squall of the closing "Touch Me I'll Scream". It's a nonstop riot of unpleasantness, sonic squalor and ultra-grubby DIY malevolence. It's also stupidly entertaining and just the poisonous tonic many of us are currently craving. They're called SHITFUCKER. You can fill in the blanks.