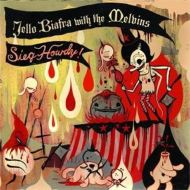 JELLO BIAFRA WITH THE MELVINS

This one's already on the Christmas list of that subset of punks and metalheads who salivate like Pavlov's dogs at the mention of certain code words (Bill Hicks, Ralph Nader, Tool, this week's Mike Patton project). But for the rest of us, there's a lot to dig into on this weird quasi-new-album. Remixes, new songs, and even a Schwarzenegger-ed "Kali-fornia Uber Alles", fresh for 2005, make for a mixed bag of anarchic, metallic punk with a slew of surprises.

The first comes immediately — the thought of Biafra tackling the prog-sludge weirdness of ALICE COOPER cult chestnut "Halo of Flies" may seem a little incongruous, but it actually works like a charm. The seven-minute-plus reworking of "The Lighter Side of Global Terrorism" crackles with the fury of vintage DEAD KENNEDYS, as does new cut "Those Dumb Punk Kids (Will Buy Anything)", a scathing retelling of Biafra's side of his dispute with his former band. Not coincidentally, the guitarwork of Buzz Osborne on this track recalls some of that speedy, "Winnebago Warrior"East Bay Ray riffing style.

THE MELVINS, for their part, are on fire here — adding a dollop of Reagan-era punk to their sometimes-difficult sludge metal really gives them a kick in the ass, and they match Biafra's liverish fury with some thundering revivalist riffs that just plain rock. The only real complaint, obviously, is that with three remixes, an "extended version," and the "Kalifornia" rehash, you're not looking at a lot of new material, especially for full price (one of the new songs, "Voted Off the Island", is fifty seconds long, fer Chrissakes). But again, the faithful have already snapped this up, and it's not like the quality isn't there. If the rehash offends your sensibilities, just pick up the source material — last year's "Never Breathe What You Can't See" — instead. Either way, Biafra's return to fronting a band is something to celebrate, especially when everyone involved has pulled it off with such fire and fury.