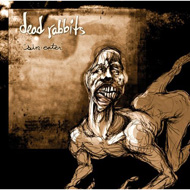 Odd name for a band and the style isn't even grindcore or death metal, but there has to be a riveting story behind it. Fortunately, the music on debut album "Sin-Eater" from New York based DEAD RABBITS is quality southern fried hard rock and metal in the vein of CORROSION OF CONFORMITY and BLACK LABEL SOCIETY. Aside from a rhythm section that could stand to be mixed with more thud and pop, the tunes are well written, the riffs are sharp and nasty, and the solos burn hot.

The seeds of DEAD RABBITS were planted in 2000 when vocalist/guitarist Mike Maney (former STIGMATA) started a one-man studio project and eventually enlisted the assistance of former STIGMATA member Jason Sunkes on guitar/vocals. With drummer Daniel Dinsmore and bassist Brendan Slater (ex-THE CLAY PEOPLE) rounding out the lineup, the quartet got down to the business of kickin' ass and takin' names.

The first thing many will notice is how similar Maney's vocals are to MONSTER MAGNET's Dave Wyndorf. Maney has one of those voices that are perfect for the musical style heard here. The aforementioned COC comparison is most evident in the guitar tone and style. One only needs to hear a song like the mid-tempo "Once Upon the Cross" with a riff that would not be out of place on "Deliverance" and features a slow-burn pace that smolders and chills at one. The same goes for the quicker paced "Till I Die", a song most worthy of getting that oversized head of yours moving back and forth in a steady motion. "Neurotic Fanatic" features an opening riff that bites like vintage NUGENT, as well a sleazy blues-based groove. A boogie slammer called "Day by Day" picks up the pace and goes for a Pepper Keenan style vocal on the verse, while "Fly On" delivers straight forward southern rock with a memorable chorus. A well-chosen cover of JIMI HENDRIX's "Manic Depression" was begging for the DEAD RABBITS treatment. Toss in a handful of hidden cover tunes like CREEDENCE CLEARWATER REVIVAL's "Fortunate Son" and JIMI HENDRIX's "Little Wing" and the result is a strong debut from a band that has this style down cold.