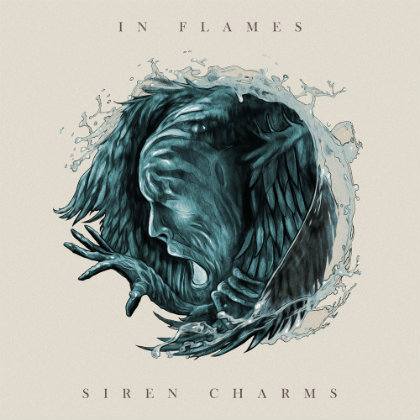 IN FLAMES, like it or not, is a new beast. Forget "Whoracle". Forget "The Jester Race". Even forget "Come Clarity". Their latest album "Siren Charms" is an overhauled and frankly softened version of the band bearing pop-friendly ear candy for those open to it. Not an aberration like, say, CELTIC FROST's "Cold Lake", "Siren Charms" is nevertheless bound to scare the crap out of many of their followers.

IN FLAMES' effort to bring throwback rock vibes and swinging harmony with "Siren Charms" is admirable to a point, working best on the final track, "Filtered Truth". Everything else in this bag of pop rocks will be considered challenging to veteran fans, to say the least.

"In Plain View" rolls out industrial synths like the set-up to a retro sci-fi adventure before the focus becomes a slow-measured power jam with a shuck-sliding tempo and cautious guitar lines as set up to a massively-intended chorus where Anders Friden rises in crescendo. The instrumentation would've been better coordinated with the banging intro, honestly, but IN FLAMES attempts to heavy things up on "Everything's Gone" with some random thrash bursts designed to hype the inherent agro-pop swings of the cut. Anders Friden's freaky resemblance to Marilyn Manson on "Everything's Gone" may or may not sit well with fans, particularly long-timers, who may be holding out for a return to any sound between the "Subterranean" EP and "Clayman". At this point, they may keep holding out or opt to move on. Since 2004's "Soundtrack to Your Escape", IN FLAMES has made a pinpointed concentration on merging heavy tones with futuristic-sounding, melodic jams, melodic being the operative word straight on through "Siren Charms".

As becomes evident by the nearly-danceable third track, "Paralyzed", the planted electronics and sliding synths within "Siren Charms" are designed to usher IN FLAMES to the cyber age. With a remix job, the syrupy airs of "Paralyzed" could be destined for EDM venues, even if the rock-grounded guitar solo would likely be trimmed away. Anders Friden pulls some of his most commanding, elegiac cleans on "Paralyzed" and the subsequent track, "Through Oblivion". The latter track is spotty ballad that ends abruptly before IN FLAMES nudges another one right behind it, the FM-courting "With Wide Eyes Open".

The stop-go guitar lines opening the title track are a cool maneuver as the song rolls and lobs on the verses en route to hefted choruses that halt on the dime the first round before resuming course. As the song nearly peters out after the second chorus, a solid guitar solo section rescues the tune and puts it back on track, even if the song once more ceases brusquely. Considering the song deals with old sea lore pertaining to sirens who lured sailors to their doom, the quick cutoff does feel like the end of days for said seafarers.

"When the World Explodes" is the heaviest and best laid-out track on the album, even if IN FLAMES opts for metalcore plugs in the beginning as set up to angelic choruses featuring synth showers and guest vocals from Emilia Feldt to offset Anders Friden's scratchy bellowing. As for any intent of giving musical representation to killer mermaids on this album, Emilia Feldt's beautiful siren song is better felt here than on the title track.

IN FLAMES manages to worm a trusty rock-jive groove into the verses of "Rusted Nail" and thus keeps the song interesting as the soaring choruses and bridges ring of Berlin-era David Bowie, all with electro washes overhead. Of course, this has every bit to do with the fact IN FLAMES recorded "Siren Charms" at Hansa Tonstudio in Kothener-Strasse, Germany, site of Bowie's "Low", "Heroes" and "Baal" recordings. Then, keeping in relative theme, the crawling pop rocker "Dead Eyes" makes no bones in saluting the SCORPIONS, as in the point in time where the SCORPIONS themselves edged toward a commercial vibe in the late Eighties.

Who and what IN FLAMES are at this point is the bipolar opposite of "The Jester Race" ages ago and that comes with their high profile ascension over the years. "Siren Charms" has exactly that, some charm to dial into, even though many listeners have already cast their stones against it. Anders Friden is one of the reasons why this album is listenable since his pipes have become refined to perfection. Yet the band's alarming shift toward conventional pop metal ostracizes the audience that initially got behind IN FLAMES and made them potential kings of the next-gen realm. "Siren Charms" has its moments, but effectively, it is the sound of settled warlords with a barren territory offering little challenge to take up their arms with proper vigor.