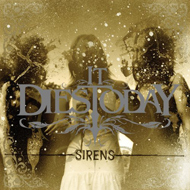 It's all a matter of preference and what some deem to be "totally rad" (or some shit like that) may be a steaming pile of dog poop to others. Fighting through mental block concerning bark 'n' croon metalcore and scraping the last remnants of objectivity from the barrel's bottom results in a relatively fair assessment of "Sirens" by Buffalo's IT DIES TODAY. The downside is that "Sirens" sounds like hundreds of other albums sitting on the shelves in Hot Topic stores and adored by mall patrols from coast to coast. It is Swedecore with "hardcore" bark vocals that give way to sickly sweet emo choruses on virtually every track. That's the cold hard truth of the album. Whether that is truly a downside depends on your point of view of course. Let's discuss it further, shall we?

The upside is that after several spins of the "Sirens" disc the realization hits that the album rocks pretty damn hard. In a couple of cases, most notably album-opener "Constant Reminder" and to a lesser extent the title track, the emo color-splash choruses are pretty catchy as well. The problem is that when the formula is followed on every single track, the explosion of melody just doesn't make much of an impact. But back the rockin' part, the rhythms are tough and tight and the riffing chunky, sometimes even approaching UNEARTH-light, at least from a vocal standpoint. "On the Road (to Damnation)" is the main example and just happens to be the only track with no crooning. The occasional melodic lead ("Sixth of June") and guitar solo ("Black Bile, White Lies") helps in making the album a little more dynamic too. Even a song loaded with sugary melodies, such as "Through Leaves, Over Bridges", includes sections that pack one hell of a punch. The thick riffs and beefy rhythms characteristic of newer SOILWORK can be heard as well, such as on "Sacred Heart (Sacre Coeur)".

In fairness, IT DIES TODAY are exceptionally good at what they do. Those of us not constantly battered with this decidedly more commercial end of metalcore will probably enjoy "Sirens" a great deal You've heard bands that are better, but you've heard many more that are a whole lot worse. It's a matter of personal preference, isn't it?