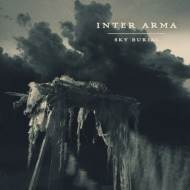 That's because the only thing that remains remotely predictable or consistent throughout the LP is a certain bleakness of mood - even though the musical ingredients used to achieve this, while, by and large, confined within heavy metal archetypes, couldn't be more diverse.

Lengthy opener, "The Survival Fires" (one of several ten-minute epics featured throughout),alone decelerates from frantic black metal to doom on its way to ethereal atmospherics, worlds away from both the song's, by now seemingly distant point of origin, and its eventual conclusion in a similarly brutal self-apocalypse.

This leads into "The Long Road Home" proper, which curiously proceeds to replicate its predecessor's template over a marathon slog of ascending intensity and interweaving guitars before abruptly bursting into blast-beats just before the finish line.

It's so far, so good for "Sky Burial", but not particularly life-altering, let's be honest...

That comes next, via the desperate howls, hypnotic drone guitars and clinically deliberate percussion revealed on "Destroyer": a true magnum opus that drags on, and on, and on with magnificent suspense, painstakingly unspooling remarkable loads of tension before the song is finally through.

Beyond this point, every additional accomplishment is frankly gravy for INTER ARMA - which isn't to say the band doesn't carry on delivering compelling fare in the shape of the tribal drumming and thrash-like strumming of "'sblood", the mesmerizing march of "Westward", and ghostly unplugged minimalism of "Love Absolute".

Bringing it all home is the album's thirteen-minute-plus title cut: an alternately wind-blown and sludge-caked exercise in post-metal eclecticism that finally matches the incredible high achieved earlier by "Destroyer", and reasserts the band's commitment to versatility, above all else.

And, at the end of the day, its actually the ease with which INTER ARMA serves up this versatility, making seventy minutes go by in a flash (especially during its superior second half),that should really elevates "Sky Burial" to an upper echelon of metallic invention, and vaults it into discussion as one of 2013's elite albums for heavy music, heavier vibes.