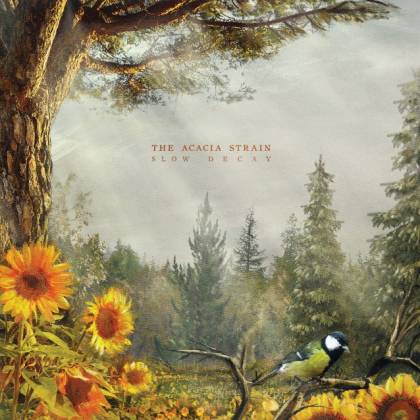 With their 20th anniversary looming over the horizon in 2021, THE ACACIA STRAIN deserve a robust slap on the back for sticking to their guns for such a long time, without ever exhibiting the slightest interest in compromise. Perhaps the most intriguing thing about the band is how they have nimbly and consistently sidestepped the overtly generic, focusing instead on the incremental evolution of their own, subtly distinctive blend of deathly metalcore. Even as far back as early classics like 2008's "Continent", Vincent Bennett's crew were making the opposition sound a little halfhearted, but even by their own furious standards, last year's "It Comes In Waves" album was a startling statement of renewed intent; one widely hailed as the band's finest work to date. As a result, there's been a slight hint of sadism in THE ACACIA STRAIN's steady drip-feeding of this, their tenth studio record. Ten of its tracks have been released already, spread across five seven-inch singles, the single-letter titles of which spelt out the word 'decay'. Experienced in isolation, these songs hammered home their creators' shared potency at this point, but it's only when listened to in its punishing, pessimistic entirety — with two new, previously unreleased tracks thrown in to complete the picture — that "Slow Decay" really clicks as a unified project.

Put simply, these songs are all among the finest ACACIA STRAIN material to date. Displaying a newfound passion for diversity and tangential leaps, the sustained fist-flurry of opener "Feed A Pigeon Breed A Rat" and the bludgeoning beatdown-fest "The Lucid Dream" are easily heavy and brutal enough to please the more myopic faithful, but it's also obvious that the band have sharpened up their songwriting, employed a more colorful sonic palette and found several new ways to ram the futility of human existence down our grateful throats. "I breathed in the smoke…" is a case in point: there was a time when THE ACACIA STRAIN represented a peculiarly streamlined and monotone approach to modern heaviness, but with howling feedback, clangorous tribal drums and a mounting sense of dread, this is closer to psychedelic doom or avant-garde sludge than anything you might expect from the men behind the monstrous 2006 album "The Dead Walk". Similarly, "One Thousand Painful Stings" weaves the angelic voice of Courtney LaPlante (SPIRITBOX/IWRESTLEDABEARONCE) through seething streams of slow-motion death, as Bennett abandons all hope with veins bulging and fists bloody. Meanwhile, the two new cuts are among the finest things here: "Crippling Poison" offers a refined upgrade of THE ACACIA STRAIN's signature cacophony, while "Birds of Paradise, Birds of Prey" is equal parts hammer-blow doom and crestfallen atmospherics.

Of course, if there's one band that's unlikely to greet their 20th anniversary with a smile and a cheer, it's THE ACACIA STRAIN. But if nothing else, "Slow Decay" proves that they are enjoying the creative process more than ever and making the best music of their careers as a result. We're all still fucked, but the soundtrack is killer. It's been that kind of year.