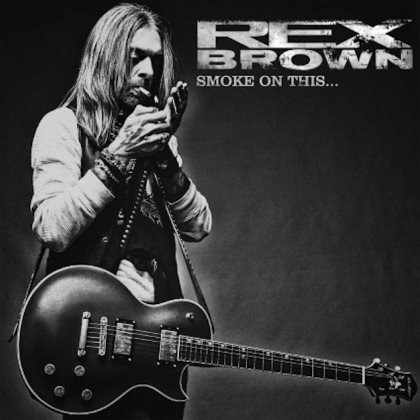 Four years after releasing his memoir, "101 Truth, 101 Proof: The Inside Story of Pantera", Rex Brown takes the next step in a musical life spread both with joy and turmoil. Judging by the shackles-free mindset of his debut solo album, "Smoke On This", Brown has his targets set way high, but he possesses the wisdom to start that journey on a new footing. Most of all, he wants his fans to know he's more than a knuckles-down bass monster who harvested an esteemed career inside PANTERA, DOWN and KILL DEVIL HILL.

Here, Brown plays guitar, bass and, check it out: sings. His right-hand man, Lance Harvill, contributed guitar and songwriting, while drummer Christopher Williams was lured by Brown to work on this project. Williams himself boasts an eclectic resume, previously playing behind Lee Greenwood, BLACKFOOT and ACCEPT. The operative word to keep in mind with "Smoke On This" is "eclectic," as Rex Brown delivers a wildly entertaining, left-of-center solo album that carries virtually no agro clouts, no thrash and no doom. What is does carry is a lot of heart and the will to "shake some shit up," as Brown has stated like a mantra about the album.

"I've had my ups and downs, like anybody in this business," Brown states in a press release for the album. "I wanted to feel like a true artist again, where I can write and record songs without worrying about any of the bullshit. We're not going to necessarily cater to metal fans, but the guys who grew up with PANTERA, a lot of them love all the same stuff that I grew up on, too. This is just something else I'm doing for fun, man, and musical freedom. Fun has to come into it, or I'm not going to do it. I've had a tremendous career, and now I feel like I'm thirty years old again. This has given me that freedom I needed."

The album certainly gets off to a loud start with "Lone Rider" as Rex Brown and Lance Harvill flick a snug set of riffs and Brown's barbed vocals against a muscular seventies rock groove. The spark is lit and flares into the pissy, KISS and AEROSMITH-nicked "Crossing Lines" thereafter. Brown snarls in the vein of Gene Simmons and drops bass bogs all over Christopher Williams's filthy whumping, with faint organs sliding like a conscience into the volume-busting clamor.

The decorous, acoustic peppering throughout the ZEPPELIN-esque "Buried Alive" is instrumentally executed with poise as Rex Brown rasp-whispers through his roughened pipes. Where listeners are going to be truly caught off guard is with Brown's BEATLES homage on "Get Yourself Alright". It's a brave move, done to see how far Brown and his team can stretch their talents. Attempted by lesser hands "Get Yourself Alright" would've been a misfire. In this case, the song is a quirky though well-intended shot of yogi-spiced positivity. Another tip to the BEATLES emerges on the dome-caressing "What Comes Around…".

The upbeat "Train Song" appropriately rails along a set of chugging chords, and Rex Brown's grizzles are better acclimated here. The song is short, sweet and punchy, but don't get settled into this vibe, at least not until the hammering blues crunch of "So Into You" later in the album. Brown challenges his audience yet again with a placid ballad, "Fault Line", tapped from a crossfire of THE EAGLES, Neil Young and GUNS N' ROSES. It's a surprising treat as it's performed both elegantly and assertively. If that isn't enough of a dust-up, stand prepared for "Grace", the bipolar, sweet-nothing antithesis to, say, "Primal Concrete Sledge". "Grace" will assuredly creak jaws from the PANTERA faithful, and to describe it in full is to ruin the surprise. Don't be afraid, though; it's unexpectedly pleasing.

Of course, anyone coming to "Smoke On This" expecting Rex Brown to reinvent some more steel is likely to skulk away with the fuming passages of "Walk" ringing in their ears. Have a go with "Best of Me", though. The looming, trancy swirls of the verses are both BLACK SABBATH and AIR wafting together in an agreeable creative space, with some meaty choruses splicing the psychedelic reverie. PANTERA took on a terrific cover of SABBATH's "Planet Caravan" back in the day and were praised for it. That spirit is here in "Best of Me", only with personal introspection to go one step further.

To his credit, Rex Brown courageously risks condemnation on top of better-deserved praise for seeking a new path, or a recharging point, if you will. The opening bars to the finale "One of These Days" is heavier than clogged sinuses, and Brown's drippy bass lines are just as nasty. Yet it's used as a launch pad for Brown's spiritual bloodletting, which bursts with authenticity, the eruptive organs around him singing with the same cry of epiphany as Brown himself.