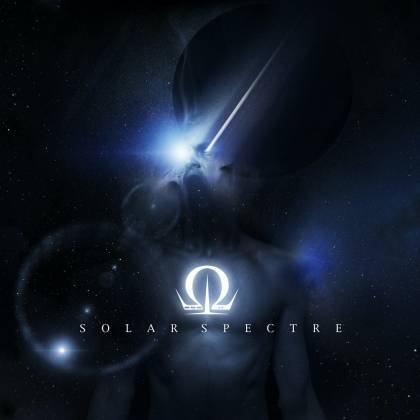 With a respectful nod to GUSTAV HOLST, "Solar Spectre" is the kind of interplanetary journey most fans of extreme metal can get behind. OMEGA INFINITY are a shadowy entity plucked from the ether by NE OBLIVISCARIS frontman Xenoyr and Tentakel P. , drummer and founding member of German art metallers TODTGELICHTER. If you're familiar with either of their respective bands, you will know to expect something uncompromising and unconventional, but a seatbelt is still recommended either way.

This is an extreme metal album for fans of bleak sci-fi and anti-cosmic malevolence, so that's definitely most metalheads. Given its obvious conceptual direction, you could be forgiven for expecting an inordinate amount of meandering ambience and psychedelic shimmering, and there is some of that, of course. But the core of this album is one of pure venom and violence, as blackened death metal seems to fold in on itself in real time, leaving the inside of your skull painted across the stars. Or, you know, something along those lines.

As they stare up at the cold, night sky, OMEGA INFINITY are undoubtedly crushed and horrified by what they see staring back at them, but they have processed that existential dismay into some of the most feral, all-out blast assaults in recent memory. There's a definite whiff of early EMPEROR's voracious, reverb-drenched squall, but this feels just as firmly rooted in the atonal aggro of REVENGE or BESTIAL WARLUST or the ketamine blitzkrieg of DEATH VOID TERROR. The result lies somewhere between death and black, but with an infinite, yawning universe where a mortal soul should be. At its most unrelenting, as on the dizzying speed trial of "Mars", "Solar Spectre" wrings lysergic value from sheer, knuckleheaded repetition and intensity. But these undead astronauts have a uniquely skewed vision: via the industrial death march of "Jupiter" or the claustrophobic New (Dark) Age dream-doom of "Neptune", they are channeling myriad subtle but subversive influences, savoring each mutant revelation along the way. Taken in its pummeling entirety, it's like being plugged into some pan-dimensional spectral mainframe, with the volume cranked to skull shatter.

As the smoldering sonic shards of closer "Mercury" fade away, OMEGA INFINITY deign to show at least one of their cards by tearing through a cover of KILLING JOKE's "Hosannas from The Basements of Hell". There's an apocalyptic fervor bubbling beneath the surface throughout this album of which Jaz Coleman would undoubtedly approve. For the rest of us, arguably less cerebral folk, "Solar Spectre" rages against the snuffing out of everything with near-psychotic zeal. Strap yourselves in and don't say you weren't warned. In space, no one gives a fuck if you scream or not.