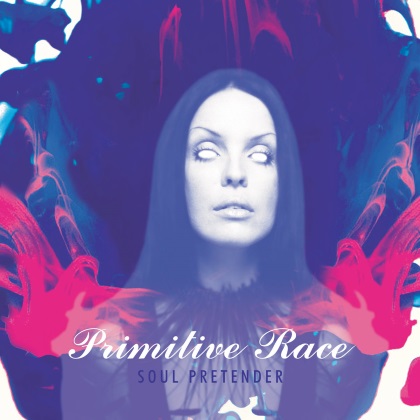 Originally staked as an industrial supergroup mirroring the essence of REVOLTING COCKS, FRONT 242 and NITZER EBB, the PRIMITIVE RACE cotillion, and sound, has been shaken up—drastically.

Now, Chris Kniker has a brand-new bag for PRIMITIVE RACE, which includes live drums by THE MELVINS's Dale Crover, and vocals by ex-FAITH NO MORE frontman Chuck Mosley. If that isn't enough of a shakeup, wait until you get a load of "Soul Pretender"'s vibe.

The most glaring difference between "Soul Pretender" and the self-titled album is a gross dispensing of the electronic and industrial elements. You won't hear anything as balls-out throbbing as "So Strange" on this album, though Chuck Mosley helps take Chris Knicker's new order to even nuttier places. Albeit, it's nowhere as discomfiting as "So Strange"'s video-depicted sadomasochism.

The barest shades of industrial filter throughout the verses on "Row House", twittering of early MINISTRY. Yet the dominant tone is a straightforward, alt-rock groove with extra bite. Chuck Mosley is in fine vocal form here while growing zany on the next cut, "Cry Out", a grunge-punk hybrid yielding a swish of KILLING JOKE and a hit of the MELVINS. If NIRVANA had remained underground its entire career, this could be its likely resonance, as Chuck Mosley wanders haphazardly all over his range like a ragged and flogged punker. He sounds purposefully besotted—on "Stepping Stone" he all but hurls from an unrelenting air of self-induced nausea—on the choruses and even spelunking into a deep burp at one point. Not that Chuck is out to replicate his multi-persona successor in FAITH NO MORE, but there's a noticeable deliberation to his weirdness on "Cry Out" that you can't help but liken to Mike Patton. It's a notion that sticks with the listener throughout the album.

The bass and guitars knobbing through the grimy, punked out "Cranial Matter" are picked up by Dale Crover's slapping tempo, which Chuck Mosley swings and globs over. A piano-whispering breakdown comes as a cool surprise, twinkling amidst the remainder of the track, which gains extra steam because of it. Likewise, filthy and equally driven is the glammed-up grit of "Take It All" and "Bed Six". Before these songs get too slick, however, Chuck Mosley's assurance to goof all over "Take it All" pays off, since at this point in the album, you're ready for his shenanigans.

If you've been following PRIMITIVE RACE, this lunatic lean upon a more sanitized form of rock initially comes as a shock, yet serving as a vehicle for intended farce, it soon seems less out of the blue. Accordingly, the band turns the would-be angst of "Turn It Up" and the title track into sarcastic, pale shades of power rock. Chuck Mosley borrows a page from Maynard Keenan's PUSCIFER playbook on the alternative wobbles of "Nothing to Behold", casting a yawning, lascivious loom on the verses. By now, one can figure where he and the song are heading: a wonderfully awkward and geeky swerve on the choruses.

To be honest, the industrial foundation of PRIMITIVE RACE is louder, more vivacious, more groove oriented and, sorry to say, more interesting than "Soul Pretender". PIG vs. PRIMITVE RACE is even more resolute and, well, crushing. Not that Chris Kniker, Erie Loch, Dale Crover, Mark Gemini Thwaite and of course, Chuck Mosley don't give it their all to create a shifty and crunky thumb bite at conventional rock here. Instead, they dial down the chaos while retaining the cynicism of, say, "Follow the Leader". This is dweeb art for the sake of calling out the music industry as collective queefs. You either get the joke or you don't, but more than likely, you'll bolt right for LARD, MEAT BEAT MANIFESTO or FINITRIBE after working to make sense of "Soul Pretender".