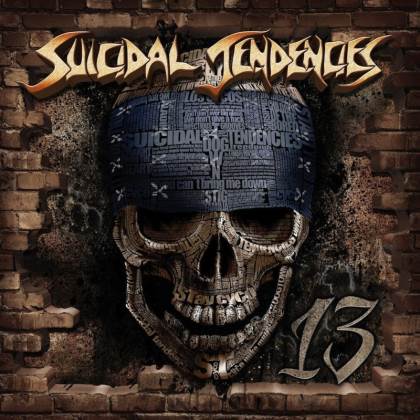 SUICIDAL's back, so Mike Muir and company want you to know like a manifesto on "Shake It Out" on their return album, "13". In the just a lil' bit awkward department, SUICIDAL TENDENCIES's latest recording bears the same title as the upcoming Ozzy-led BLACK SABBATH album this year. For Mike Muir, the number 13 has a couple extra hands at work. This is SUICIDAL's first album in 13 years and the group's official 13th album. Now with a healed back, Muir takes another trip at the brain to celebrate the group's thirtieth anniversary with a title that some might consider lucky and others would cower from.

Okay, so now that we have the numbers play out of way, let's move on. The most important thing to discuss about "13" is that SUICIDAL TENDENCIES, after a long layoff with many teases over the years of reunification, is a hardcore band once again. Not quite the same rabble of skate brats that laid down the unforgettable self-titled album of 1983, but shades of that era are felt in pockets of "13". However, the flavor is more akin to washes of "Join the Army" and "The Art of Rebellion". Gone, for certain, is the melodic crossover thrash of the "How Will I Laugh Tomorrow When I Can't Even Smile Today?" era that was probably the most prolific point in SUICIDAL's career and one of the best of its ilk, notwithstanding D.R.I.'s "Crossover" and "Four of a Kind". Or S.O.D.'s "Speak English or Die", for that matter.

"13" is the most street SUICIDAL TENDENCIES has sounded in forever and a large chunk of that comes from the funky bass lines of Tim "Rawbiz" Williams and wicked guitar scrapes from Dean Pleasants and his shotgun rhythm rider, Nico Santora. The speed comes in increments, i.e. "Cyco Style", "Smash It" and the breakaway finales to "Make Your Stand" and "Slam City". In-between is one wailing P-Funk salute after another. Even when "Shake It Out" tries to simply rock, there's and underlying hump 'n funk prevailing over it all. If you're familiar with INFECTIOUS GROOVES, then "13" will be easy to settle into, since this album feels like a coupling between both of Muir's best-known attractions. Albeit, when he requests a Diet Pepsi in the middle of the cut, throwing a little old school shout from a grown-up perspective to "Institutionalized", it's a total scream. Now in his fifties, at least Muir can get his own damned Pepsi without waiting for his proverbial clueless parents. In 2013, all Muir wanted was just one Diet Pepsi. Just one Diet Pepsi. Riot.

As Mike Muir repeats themes of convictions and underground unity throughout "13", it's all so nostalgic and quasi-ideal you have to simply smile at it all. If you're going to come back after lying in stasis, at least "Show Some Love Tear it Down" is the right platform to achieve it. Even better Muir and SUICIDAL have the confidence in themselves to toss in a brief touch of jazz syncopation in-between the anthem's agro huffing.

"13" is nearly as raw as a sashimi platter and there's a certain charm to that. The inky, stripped cadence to this album is the perfect feel for the nutty jive of "Slam City" and the ripping rage of "Cyco Style". You're waiting with baited breath for "Slam City" to live up to its title and at least the guys deliver in the final section. The counterpoint to "13" is that it hardly sounds as dangerous as it purports itself to be, and it's nowhere in the realm of delivery by the gangbanger juvies who were some of the fastest hombres of their time in 1983. Doesn't matter much, though. SUICIDAL's back again, and it counts enough this time.

SUICIDAL TENDENCIES at this point is a fun ride for those who wanna slam and not mosh. The velocity comes in doses instead of perpetually, but that's been the m.o. in the band as far back as "Lights Camera Revolution!"Mike Muir's assembled a pretty cool ensemble of punk macks with Dean Pleasants hanging tough as Muir's long-trusted lieutenant of static. The gnarly axe of Rocky George and whumping bass of Robert Trujillo are still well-missed long after they left SUICIDAL, though seldom few will complain what Pleasants and "Rawbiz" respectively bring to the table on "13". They fit each other like bandanas and knee-high tube socks. This is an album that had every right to flop but at the minimum, "13" keeps the slam in the can for Mike Muir and it tosses in a little funk flair to-boot.