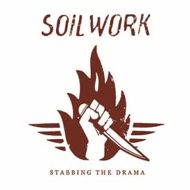 Utter the name SOILWORK and there'll usually be two decisive responses, the "I don't get what this band is all about," or the "SOILWORK rules!" crowd. You get it or you don't, love it or hate it. No matter what category you fall under, the band has to be commended for having the capacity to elicit those kind of passionate responses one way or another. You never quite know what these guys are going to do, and a perfect example of that was "Figure Number Five". With the release of "Stabbing the Drama", that's going to be the first and foremost question: "Does it sound like 'Figure Number Five'? Or more like 'Natural Born Chaos'? What!?" Easily answered, it's more like "NBC" than "FNF", but certainly not a clone of "Natural Born Chaos" by any means. "Stabbing the Drama" is missing some of the magic, and urgency found on "Natural Born Chaos", or even "Predator's Portrait". Magic may have made "NBC", but what's driving "Stabbing the Drama" is its intense emotional weight, I'm talking chest-crushing emotion. They've got a signature sound now, and "Stabbing the Drama" is a slicker, more streamlined SOILWORK, zeroing right in on the elements that they are known for and excel at, the emotional aggression, strong guitars, heavy use of melody, and big hooks within the choral moments.

Production values are used to achieve a desired result, and that's a vocal bombardment first. The guitars come second. Rhythm guitar comes in at a lower tuned level, while leads and solos come in sharp and clean sounding. Songwriting is very typical of this band, the stout verse and near sing-a-long chorus moments, then intense guitar leads. Tempo varies nicely on most songs, however there's successful use of quieter moments, soaring singing sections, passionate leads that brand the songs with memorable licks. Every track is layered with many different textures, harmonies, confidence, moody and intense atmosphere, executed with clear-cut precision. Couple that with the lyrical concepts of all the "dramas" and obstacles that befall the "youths" of today, and there's your "Stabbing the Drama" in one big-ass nutshell.

"Stabbing the Drama" — Title cuts rarely measure up to be the best on any release, but this one sets the tone with it's dramatic intro and giant chorus.

"One With the Flies" — A near-death growl punctuating the line "GO" really hits the mark as a listener, but this is an open and spacious song that displays a strong solo.

"Weapon of Vanity" — The total package, with giant leads, up tempo, heavy use of the melodic singing, and aggressive drumming. Highlight to "Stabbing the Drama" as a whole.

"The Crestfallen" — Screeching vocals, guitars aren't as prominent as I would like. Occasionally, this has a down and dirty rock boogie to it. Beautiful singing frequently keeps the song floating, saving it from being ordinary.

"Nerve" — Soaring and galloping, emotionally intense in the vocal department. Keys are heard pacing the song at times, and a fast scaling solo finishes it off.

"Stalemate" — The drummer (Dirk Verbeuren of SCARVE) finally shines on this one, stomping and snorting, with good fills. Guitars hug the drum lines, while the vocals harshly screech, broken up with an occasional and very welcome growl.

"Distance" — I sit here reminded of SOULFLY, then an equally odd comparison pops into my head: That sounds like Tomas from EVERGREY! Bizarre, I know. The extended lead and solo pulls me back from such thoughts.

"Observation Slave" — Chugging along at several different paces, this is another soul baring cathartic release. I feel like I'm reading someone's diary.

"Fate in Motion" — Moody both in pace and dramatic weight, guitars shimmer in and out of the song, and a total of five different vocal approaches are used.

"Blind Eye Halo" — Short, tightly strung, full on metal song. Aggressive and oh so passionate, pulling the lyrical concepts of "Stabbing the Drama" to a full circle: lashing out.

"If Possible" — Everything SOILWORK is trying to put across with "Stabbing the Drama" is finalized on this one. Melody galore, up-tempo pace, soaring higher and higher. The outro is beautiful guitar picking, and I find the use of "quiet" to be extremely powerful.

Brutal Truth: Emotional intensity alone is not a substitute for aggressive music, which is something you expect from a metal band. "Stabbing the Drama" is good, even pleasant for the most part. It should satisfy die-hard fans. But what I find really missing from this release, is more of those deep growls that really accentuate things vocally. I want to be kicked upside the head, goddamnit, by the guitars, by something! The vocals are so prominent with the various approaches and layering, it takes everything you have to actually hear the music.