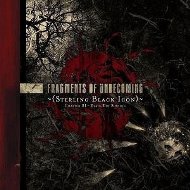 I recall applauding Germany's FRAGMENTS OF UNBECOMING in a review of the band's Metal Blade debut (and sophomore release) "Skywards/Chapter II: A Sylphe's Ascension". In said review I acknowledged the band's unabashed love of the Swedish melodic death metal style, but still found the album to be finely crafted and genuinely entertaining. "Sterling Black Icon / Chapter III: Black But Shining" still owes a debt to the Scandinavian style, but shows more individualism.

Along with a bevy of better-than-average riffs and just the right amount of harmonizing and melodic leads, the most noticeable improvement comes by way of the vocalist position. Guitarist/vocalist Stefan Weimar has lightened his load by bringing in lead vocalist Sam Anetzberger (LEGACY) who has helped the band to beef up its compositions through the utilization of a dual vocal approach. While Anetzberger's mid-range growl is commanding, the songs are given more depth with the addition of Weimar's higher-register tradeoffs and backing vocals.

On "Sterling Black Icon", the band continues the practice of sprinkling a handful of brief instrumental interludes (including the closing piano-laced piece "Chamber Noire [Departure]") amidst the formal songs. There is also a generally epic feel to the album. Though the whole is greater than the sum of its parts, the disc does include a few highlights worth mentioning. The two longest tracks at over seven minutes apiece, "Dear Floating Water" and "Breathe in the Black to See" are also two of the best. Both work to keep the listener's interest with a foundation firmly rooted in the main melody, yet with minor excursions into different tempo territories. On the whole, "Dear Floating Water" is a departure from the rest of the disc because it rides a more pronounced, and slower tempo, groove, once again with a good balance between stalwart riffing and tuneful harmonies. A chugging march and sinister lead ultimately breaks into a frenzied tempo and nasty riff that is introduced with a blood-curdling scream on "Breathe in the Black to See", song that represents the height of the band's newfound vocal attack. "A Faint Illumination" is worthy of pointing out as well for its catchy chorus. Highlights aside, the album works because there are no weak tracks.

What this all translates to is that the group's third release will not turn heads for its inventiveness, but is nonetheless a strong melodic thrash/death album from a band that comes off as more confident in its style. Color me satisfied with FOU's third installment.