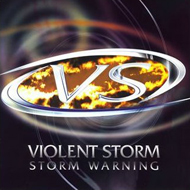 VIOLENT STORM would be a noteworthy b-level hard rock project in any case, its members' resumes sporting past work with ZEBRA, YNGWIE MALMSTEEN and BLACKMORE'S NIGHT — you know, the kind of thrown-together studio group that inevitably comes out in Japan a year before anywhere else. But these guys have friends in high places. "Storm Warning" marks the first time in history that JUDAS PRIEST axeman K.K. Downing has laid down a lead break on anything but a PRIEST record. Not to be outdone, Malmsteen himself guests on two tracks, "Pain" and "Fire in the Unknown". And if that's not enough, noted producer Roy Z engineered the sessions, and shows up on a couple tracks too.

Now, there are two kinds of metal fans in the world — the first type just surfed away from this review to go buy this album based on its reflected star power alone. The rest of you would still like to know, flashy guest spots or no, if it rocks or not. The answer is yes — with some reservations. This is the kind of hard rock that is, for all intents and purposes, power metal in spots, and the band writes some enjoyable, if fairly pedestrian, anthems. "Fire In the Unknown" (featuring raging Yngwie and Roy Z solos) is hurt a little by clumsy lyrical phrasing and a bad drum sound, but it's still hard to resist the catchy hooks and uplifting vibe of this barn-burner. "Screaming in Your Face" has some of that Eastern-sounding guitar work and a darker tone, with a great vocal line, while "Owning You" is a catchy Malmsteen-esque number that somehow manages to stuff the busiest bassline in rock history into the chorus without terribly damaging the song.

Vocalist Matt Reardon has a melodic but slightly gritty voice, a very enjoyable Jorn Lande kind of singer, more of a rock guy than a high-octave screamer, and he carries the day even when the lyrics are cringe-inducing (especially "Deceiver" and "Alimentary Fable"). Band mastermind Mick Cervino is no slouch either, turning in a nice bass solo on "Fable", while delivering some tasty rhythm riffs that bring a nice modern feel to his overt influences (two of whom are the guests listed above, definitely).

The phrase "likably generic" comes to mind here. There are definite musical chops on display here, even outside the high-profile guest appearances, but the songs are your textbook Hard Rock 101 clichés, not helped by the low-buck production and clunky drums ("Empty Hope", for example, would sound miles better without what sounds like a cheap drum machine). They're not bad, by any means, they're just kinda there, a nice place to hang some blistering guitar solos and toss in the occasional cool chorus to keep people awake. In short, it's a "project" in every sense of the word. It's a decent debut, and given time together as a full working band, VIOLENT STORM could become a major player in this scene. But right now, "Storm Warning" can only be recommended to those absolutely starving for melodic hard rock, quality be damned, and those obsessives who'll be secretly disappointed that they can get the CD easily, for less than forty bucks, and without an OBI strip on the side.