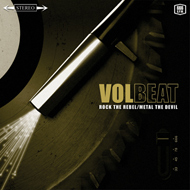 Rock The Rebel / Metal the Devil

Denmark's VOLBEAT exploded onto the European scene with a smashing debut called "The Strength/The Sound/The Songs" that was reviewed by yours truly on this very site (7.5/10). The band's spirited blend of Elvis Presley vocals (from vocalist/guitarist Michael Poulsen),hard rockin' riffs, '60s-style melodies, and just a hint of punk rock on that album was refreshing and memorable. The group continues that approach with "Rock the Rebel / Metal the Devil", now dubbing its style "Elvis Metal 'n' Roll," a fitting description for a unique band and a fun new album.

Comparatively speaking, "Rock the Rebel / Metal the Devil" matches the quality songwriting and tough delivery of its predecessor, but does not necessarily better it. Considering that its predecessor was a grand album in its own right, this is not a bad thing. Perhaps the main difference is that Poulsen really lets loose with his vocals this time, sounding even more confident and thoroughly in command of the melodies and vocal patterns. Starting out with a big beat and a little acoustic slide, album opener "The Human Instrument" soon gives way to tough chugging goodness and the first of many memorable choruses. The muscular rhythm section and fat riffs are matched nicely with a great melody on "Mr. & Mrs. Ness" and the super '60s-style tunefulness of "Radio Girl". The use of acoustic strumming and a melodic lead (that follows the vocal pattern) on "The Garden's Tale" sports a pinch of the aforementioned punk influence when the boys begin rocking out. The tune also features guest Johan Olsen (MAGTENS KORRIDORER) who trades verses with Poulsen to splendid effect. "Devil or the Blue Cat's Song" revels in that Elvis vocal delivery and is one heck of a boogie rocker. The staccato vocals on up-tempo chugger "A Moment Forever" work wonderfully. Down home picking and JOHNNY CASH vocals/melody make "Sad Man's Tongue" an effective change of pace, while the vocal harmonizing on the slower tempo and very melodic "Soulweeper #2" is a nice touch as well.

Though VOLBEAT has received critical acclaim in its native country, I suspect the band is virtually unknown in much of the rest of the world. Hopefully, that is beginning to change, as "Rock the Rebel / Metal the Devil" is an album that deserves to be heard by fans that are looking for the full rock experience from a group that is anything but run of the mill.