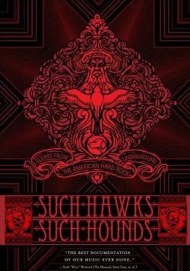 Such Hawks, Such Hounds: Scenes From...

Notice the term "Hard Rock" is used here, as opposed to "Heavy Metal". It is a point raised throughout "Such Hawks, Such Hounds" by the myriad musicians that have been part of what has generically — and irritatingly so to many — been termed "stoner rock." "Rock" being the operative term then, the DVD explores a world existing beneath that of mainstream hard rock, a world inspired by everyone from HAWKWIND to any number of bands on the Dischord Records roster (the D.C. hardcore scene is brought up quite often actually) to PENTAGRAM and BLACK SABBATH. It is a world inhabited by folks that play for one reason only; to make heavy music; "heavy" meaning anything from fuzzed out Neanderthal riffs to subsonic tones to swirling psychedelia and far out trips to the center of the mind.

"Such Hawks, Such Hounds" plays like an independent film more than a straight documentary, giving it a warmer feel. In addition to the coverage of major events like SLEEP's entrance onto the scene (and the recording of "Dopesmoker"),the ascendance of HIGH ON FIRE, the influence of punk rock, the role of nature as an artistic inspiration and the importance of album art, the DVD allows time for performance clips — though typically only partial ones — between commentary segments, which is particularly important for viewers that have had limited exposure to the genre.

While the DVD works generally as a historical documentation of the movement from 1970–2007 (involving acts like KYUSS, COMETS ON FIRE, FATSO JETSON, EARTHLESS, SUNN O))), THE OBSESSED, DEAD MEADOW, etc),the emphasis is on later period bands. A lot is packed into 84 minutes, but not enough to give the uninitiated a truly comprehensive look at certain developmental periods and influential bands. It is hardly a fatal flaw though; it simply would have been nice to have a little more to chew on in this regard.

Regardless, this one is more about the tight nit and dedicated community of stoner and doom rockers as told by a variety of scene veterans, including Billy Anderson, Greg Anderson, Jack Endino, Matt Pike, and Eddie Glass (to name just a handful),all of whom contribute in meaningful ways. The commentary from Geof O'Keefe (PENTAGRAM) and Scott "Wino" Weinrich (THE HIDDEN HAND, THE OBSESSED, SAINT VITUS, SPIRIT CARAVAN, etc) is especially insightful.

In fact, Wino represents the prototypical lifer, a man that has always lived for his art, regardless of financial hurdles, personal demons, or industry trends. Weinrich's discussion of his triumph over chemical dependency (during the bonus feature "Wino Cleans Up") is a real eye-opener. As an icon of the genre, Wino's stories are engrossing, whether he is discussing punk's acceptance of THE OBSESSED or his role as a stay-at-home dad.

As you may have gathered then, the personalities involved, the varying viewpoints, and the modes of artistic expression explored are what really make "Such Hawks, Such Hounds" an intriguing film. There isn't another one out there quite like it.