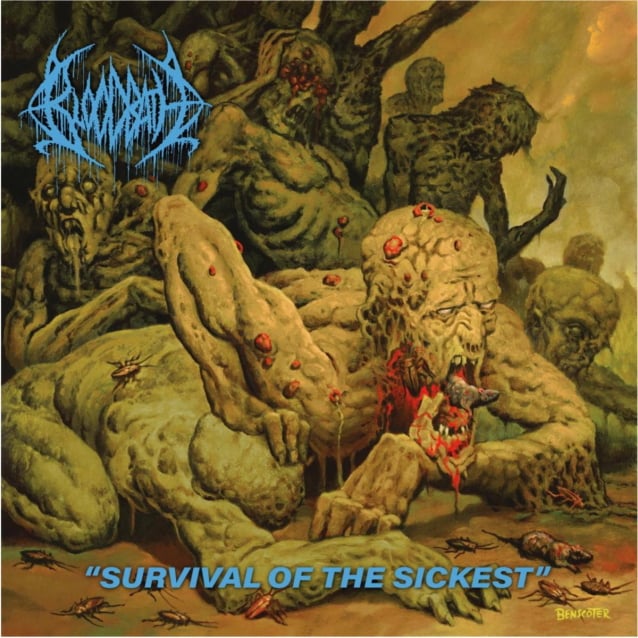 Survival Of The Sickest

These are a fresh set of halcyon days for death metal, with countless great new bands emerging from the international sewer network, and many of them palpably informed by the spirit of the old school. In a sense, BLOODBATH are the band that laid down the most effective template for the genre's renaissance. Formed as a straight-ahead tribute to death metal's first couple of waves, the Swedes have been an intermittent force, but one that has consistently shown how to make old-school records with a very contemporary bite.

Since the recruitment of PARADISE LOST's Nick Holmes as their third frontman a decade ago, BLOODBATH have steadily grown in stature, and their last two albums in particular — the gruesome "Grand Morbid Funeral" (2014) and the black-hearted "The Arrow of Satan Is Drawn" (2018) — were as venomous and distinctive as any of the arcane classics that first inspired members of the elegant and classy KATATONIA to march down this brutal path in the first place. For those who live and breathe this stuff, "Survival of the Sickest" arrives with a lot to live up to.

But was it ever in doubt? Despite their resolute devotion to the deathly cause, BLOODBATH have never released the same album twice, and their sixth full-length offers another subtly deviant take on the same revered elements. Stripped of the black metal vibes that were woven through "The Arrow…", these songs take the Swedish quintet back to the murderous blend of European and American death metals that proved so potent on 2004's "Nightmares Made Flesh", but with some of "Grand Morbid Funeral"'s twisted undercurrents thrown in for extra queasiness. The opening "Zombie Inferno" is a brash, ugly riot: a fantastic way to slam credentials and values down on the table, its ferocity is laugh-out-loud exciting. Next, "Putrefying Corpse" flails and flays with true early '90s abandon, like some warped hybrid of early GORGUTS and "Harmony Corruption"-era NAPALM DEATH, with Holmes's ageless, rasping roar conducting the madness from the eye of the storm. Even more twisted and grim, "Dead Parade" blearily salutes the genius of AUTOPSY before veering off on a blistering, blastbeat-powered tangent.

The remaining tracks are all of a similar quality and executed with the same swivel-eyed intensity. This band are such masters of the form that "Survival of the Sickest" could almost be mistaken for death metal's greatest hits, but BLOODBATH's fiercely intelligent songwriting whips all those cherished elements together into new and perverse shapes, like some kind of nefarious miracle. Arguably the most startling of the lot, the closing "No God Before Me" wallows in swirling, slow-burn MORBID ANGEL vibes; like some distant cousin of "God of Emptiness", but armed with a genuinely extraordinary, two-note chorus that outlasts the barrage of riffs and brings this magnificent album to a wickedly haunting crescendo. Real deal death metal, executed by masters of the craft: "Survival of the Sickest" is horribly good.