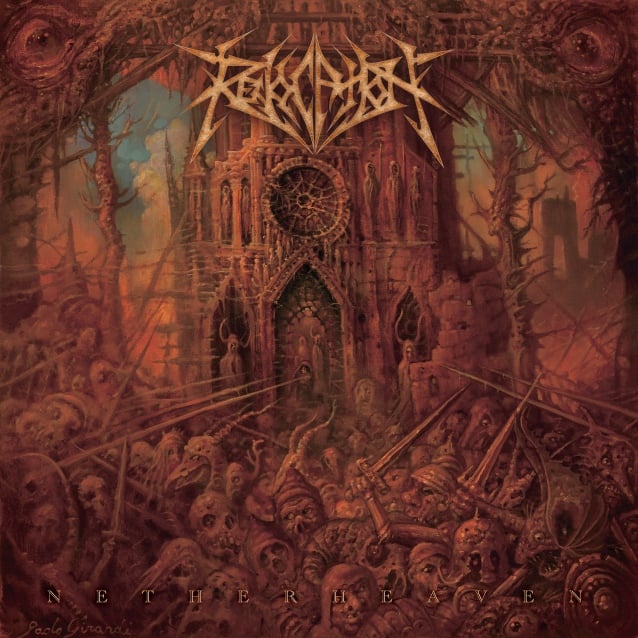 A gleaming model of consistency, REVOCATION have spent the last 20 years establishing themselves as one of the most ferociously ripping metal bands of the modern era. Rooted in death metal and thrash, but by no means terminally tethered to either, lethal virtuoso David Davidson's crew stand apart through sheer force of musical personality. What separates "Netherheaven" from the band's seven previous albums is that REVOCATION have never sounded as gleefully blasphemous and pissed off as they do here. In many ways the closest thing they have made to a pure death metal record, albeit still with all the expected ingenious detours and mis-directions, their eighth full-length goes for unholy broke from start to finish.

An opening brace of "Diabolical Majesty" and "Lessons in Occult Theft" encapsulates the slight but impactful change that Davidson has made to his band's sound. The former is a beautifully constructed extreme metal monolith, with razor-slash hooks, explosive bursts of speed and the crushing, grim atmosphere of MORBID ANGEL in their '90s pomp. The latter is an intricate assault on the senses, steeped in nimble-fingered technicality but almost overburdened with great riffs and moments of eerie restraint. "Nihilistic Violence" repeats the trick, via the deathliest mid-tempo thrash riffs known to man or beast, and with a mid-song eruption of nastiness that oozes "Hell Awaits"-style malevolence; "Strange and Eternal" is an ornate prog-death labyrinth, with deeply tasteful old-school metal melodies woven into a bloodthirsty tapestry.

The second half of "Netherheaven" keeps extremity levels flying high, but Davidson's songwriting takes an even deeper dive into the darkness. "Galleries of Morbid Artistry" lives up to its evocative title, morphing from slow-rolling thunder to blackened downward spiral, imbued with a very European frostiness but still precise and punishing. A classy instrumental piece, "The 9th Chasm", showcases the extraordinary chemistry between Davidson, bassist Brett Bamberger and drummer Ash Pearson, while both "Godforsaken" and "The Intervening Abyss of Untold Aeons" revel in the contrast between churning, dissonant scree and the neck-snapping velocity and verve of thrash metal's macabre wing. The closing "Re-Crucified" sums it all up in one neat, four-minute killing spree: REVOCATION have always been an exhilarating proposition, but Davidson has never sounded as thrilled by his own infernal din as he does here, particularly during the exquisitely fluid lead break that he peels off just before the song reaches its brutish denouement.

You can hear the confidence and conviction pouring from every last bit of it. The darkest, heaviest REVOCATION album yet, "Netherheaven" is a heavyweight piece of work for the gnarliest of times.