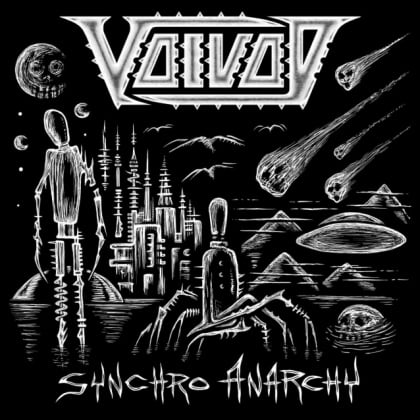 How does a band survive for 40 years without ever sounding like anything else? Their earliest records aside, VOIVOD have been ferociously original throughout the last four decades; a unique and unassailable benchmark for progressive heaviness. Perhaps uniquely, they negotiated the tragic loss of talismanic guitarist and creative mastermind Denis "Piggy" D'Amour with grace and intelligence, locating the exact right man to replace him. Since recruiting Daniel "Chewy" Mongrain, VOIVOD have been back to the astonishing levels of creativity and skewed ingenuity that informed cherished classics like "Dimension Hatross" and "Nothingface". 2018's "The Wake" was widely and rightly acclaimed as the best thing the Canadians had done in decades, and so "Synchro Anarchy" arrives amid high expectations. The good news (and there is no bad news) is that it is, almost inevitably, brilliant.

Audibly exhilarated by their own mad ideas, VOIVOD have never sounded more vital than they do here. Opener "Paranormalium" crams a ridiculous number of grotesque riffs and syncopated, rhythmic tricks into its five-and-a-half minutes, but the band's knack for wonky hooks lifts everything to that sublime, psychedelic metal realm that only this band have ever truly explored. The title track is even better, with mischievous time signatures and some of Mongrain's weirdest riffs colliding with Denis "Snake" Bélanger's sonorous melodies, which are elegantly woven through the avant-prog chaos. Recent single "Planet Eaters" is a gem, with strong echoes of VOIVOD's early '90s psychedelic transformation, but more sophisticated and unashamedly proggy; "Mind Clock" is a bewildering sprawl that morphs from downbeat dirge to jagged, fidgety intensity. Even at their most straightforward, VOIVOD defy convention: "Sleeves Off" is an infernally catchy four minutes, with a gritty punk edge and scabrous, JESUS LIZARD-like riffing. Equally succinct, "The World Today" is all snotty, noise rock spikiness and KING CRIMSON-esque ebb and flow.

Always revered in the metal world, VOIVOD have become increasingly cherished in prog circles too. As with "The Wake", "Synchro Anarchy" showcases a band reveling in the freedom to do whatever they want, and while none of this could be mistaken for any other band, everything from the tense, slow-build clatter of "Holographic Thinking" to the lysergic thrash fractals of "Quest for Nothing" sounds more evolved and effortless, as if VOIVOD have connected with some all-powerful cosmic mainframe and are simply pissing genius as a result. By the time you reach "Memory Failure", another eccentric but lethally effective cocktail of everything discerning folk love about VOIVOD, the possibility that (a) this is another masterpiece, and (b) that we are really not worthy of this band, will be impossible to ignore.