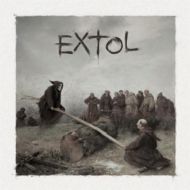 Ask the guitarists within EXTOL to strum a powerchord, and the shocked response would probably be akin to someone being told they have six months to live. Such simplicities just aren't in the musical make-up of this Norwegian quintet. They twist you round and round the spectrum of discordance, then whip you back to again to be catapulted off into a new soundscape.

Somewhere in the mix, and slightly unusually for this type of band, there are also nods toward contemporary hardcore, which the band is only too keen to profess to. "Confession Of Inadequacy" is one of the best examples at the harder end of this infusion, drilling squalls of discordant fury into your brain at a fair old pace. Elsewhere, in several places throughout the proceedings, there are passages that wouldn't seem out of place on a QUICKSAND album or suchlike.

Given their eclectic nature, it's hard to believe that EXTOL were once involved with something as occasionally narrow-sighted and insular as black metal. Outside all genre classifications, EXTOL are evidently just a talented bunch, period.