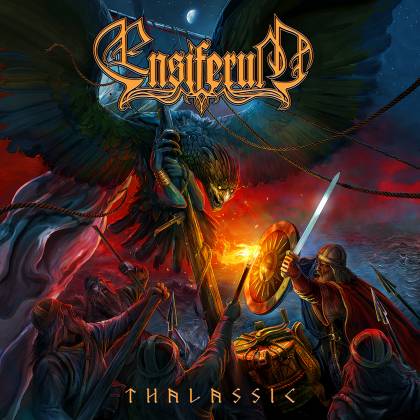 It's almost impossible to achieve longevity in heavy metal without repeating yourselves occasionally. In the best possible way, ENSIFERUM have been the model of consistency over the years, with a long-established musical identity and a steady forward march toward bigger and better things very much part of the bargain. Righteously huge in Europe, the Finns have so far lacked the collective charisma to emulate AMON AMARTH's unlikely ascent to festival headliner status, but "Thalassic" sounds like the record they needed to make to unlock those last few potential levels.

Any fear that founder Markus Toivonen had run out of ideas by this point are walking the plank within seconds of sumptuous overture "Seafarer's Dream". Although not a full-blown concept album, "Thalassic" does revolve around a core theme of battles, beasts and mythological happenings on the high seas. One result of that subtle shift of focus is that ENSIFERUM's eighth studio record is a much more rounded affair than any of its predecessors: with the wind in their lyrical sails, the band's mastery of atmosphere and drama has blossomed. You might not hear it in the exuberant bombast of preview single and instant crowd-pleaser "Rum, Women, Victory" (which might initially seem like a boozy ALESTORM knockoff but is actually one of the most straightforwardly ripping tunes ENSIFERUM have recorded yet),but from the widescreen thunder of "Andromeda" onwards, "Thalassic" showcases a subtly enhanced and expanded musical vision, with more depth to underlying orchestration, and more muscular heft behind everything else.

It's always been an impressive feat, ENSIFERUM's blending of melodic death metal's heads-down intensity with the fog-shrouded pomp of Finnish folk metal. The latter influence has always been closer in spirit to AMORPHIS than to FINNTROLL, and its potency has never been more apparent than in the likes of "For Sirens" and "The Defence of the Sampo", wherein Toivonen's (or possibly bassist Sami Hinkka's) clean vocals provide an emotional counterpoint to frontman Petri Lindroos's dominant rasp. Elsewhere, "One with the Sea" is truly monumental. At six minutes, it's a veritable epic by ENSIFERUM standards, but it's the song's ghostly grandeur and euphoric chorus that mark it out as a career high point. It also helps that Janne Joutsenniemi's production is immaculate: vivid, warm and nuanced, but still exerting the ribcage-rattling oomph that modern metal demands.

Concluding with the riotous call to revel of "Midsummer Magic" and the imposing, intricate and laudably ambitious "Cold Northland (Väinämöinen Part III)", "Thalassic" isn't radically different from previous ENSIFERUM records. What it does do, and brilliantly so, is confirm beyond doubt that this band are more than worthy of their place at European metal's top table. Consistent? Yes. But also getting stronger and sharper with every fresh skirmish, rum consumption notwithstanding.