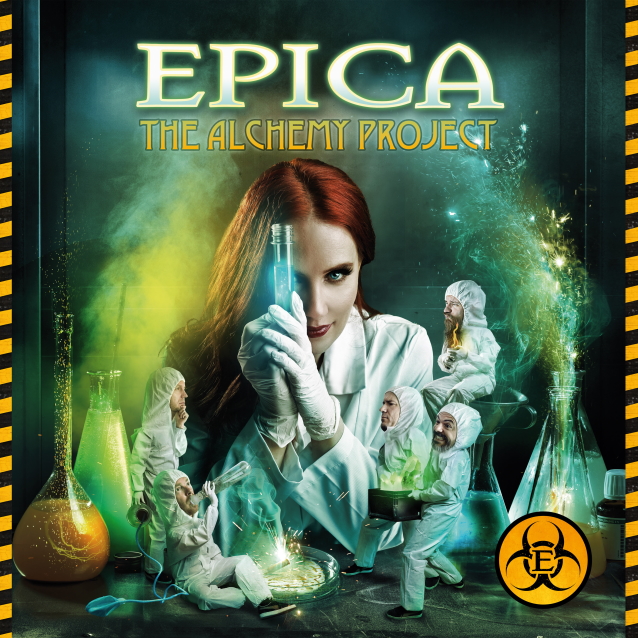 There are many reasons why EPICA continue to be the discerning metalhead's symphonic ensemble of choice, but the most important one is that the Dutch crew are measurably and joyously heavier than all their contemporaries. On "The Alchemy Project", they reinforce the point with considerable gusto.

Presented as an EP, but several minutes longer than "Reign In Blood", "The Alchemy Project" is too substantial to be a throwaway stopgap. It also boasts a dazzling array of star guests, ranging from the expected (Charlotte Wessels) to the pleasantly surprising (ABORTED's Sven de Caluwe). These collaborations play out across seven new songs, each audibly tailored to the talent of those involved. Having reached the end of an extravagant trilogy of albums with 2021's "Omega", EPICA clearly have a few possible future routes to pursue, and most of them unexpectedly crushing.

The most effective moments come when EPICA step out of their symphonic comfort zone. "The Great Tribulation" pairs the band with the imperious savagery of FLESHGOD APOCALYPSE, and the end result is bombastic enough to shake Hell's foundations. EPICA have always had a close relationship with (symphonic) death metal, and this wholesale embrace of its fire and fury suits them very well. Likewise, the majestic prog-style pomp of "Wake the World" could hardly be more perfect for URIAH HEEP's Phil Lanzon and KAMELOT's Tommy Karevik to do their respective things, with Simone Simons's effortlessly pristine vocals providing the necessary glue to hold it all together. Best of all, Norwegian mavericks SHINING pop up on "The Final Lullaby", dragging EPICA down a wonky, alt-metal alleyway, replete with Jorgen Munkeby's squawking sax.

An ornate moment of respite, "Sirens — Of Blood and Water" is lavish and exquisitely pretty, with Simons, Wessels and Myrkur's voices combining to great effect. "Death is not the End" combines melo-death with musical theatre, driven forward by the unstoppable tones of SOILWORK's Bjorn "Speed" Strid, while the aforementioned ABORTED frontman delivers his usual inhuman performance on the full-bore death metal of "Human Devastation". Only "The Miner" sounds credibly close to a regular EPICA song, but the resemblance is fleeting, thanks in part to INSOMNIUM frontman Niilo Sevänen's eerie rasp.

"The Alchemy Project" may not be a particularly coherent artistic statement, but EPICA clearly had an absolute blast making it. A celebration of friendship and the glorious malleability of heavy metal, it will more than suffice until the band's next grand conceit.