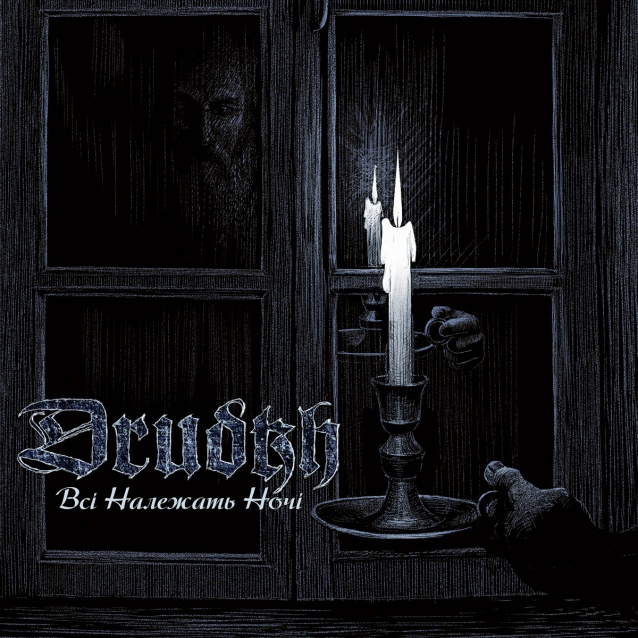 All Belong To The Night

Heavy metal and its numerous subgenres carry meaning and purpose as vast as the world itself. Black metal is most notably associated with matters of Satanism and the occult, but it, too, can be a canvas fit for expansive expression. Aware of the tumultuous times that Ukraine is experiencing, artistic expression is a clear way for people to make sense of the chaos and violence, and it's an obvious tool for those within the nation's borders to simply cope and get by. The revered, Kharkiv-based act DRUDKH have just given birth to "All Belong To The Night", a powerful album that is in many ways a soundtrack to what Ukrainians are experiencing.

Roman Saenko, also known for his work with HATE FOREST and BLOOD OF KINGU, among others, has led DRUDKH's charge for 20 years, issuing new releases frequntly and refraining from performing live. For a band as prolific as DRUDKH, it's remarkable that Saenko has been able to continue to keep things interesting. "All Belong To The Night" continues in that tradition, a four-song, 45-minute release that's challenging, raw and inspiring. The album draws some inspiration from the work of Yakiv Savchenko, a renowned poet and literary/film critic whose outspoken, anti-communist views led to his arrest and execution in 1937 by Joseph Stalin's regime. His words and sentiment can be appreciated universally, but they most certainly resonate through the lives of Ukrainians and DRUDKH's work today.

"The Nocturnal One" kicks things off with a triumphant, mid-paced surge, bringing to mind the unifying drive of a battalion's march toward war. The opening number is, at least in part, inspired by Savchenko's poem "The Victims Of The Nocturnal One", a piece that touches upon the encroaching darkness and hard times that defined Ukraine during the poet's lifetime. The tremolo-picked sound waves are transcendental, to say the least, entailing a hypnotic quality that doesn't render listeners weak as much as it empowers with an almost tangible feeling of inevitable survival and perseverance. The song's spacious midpoint reprieves augment the tension-building and sense of drama.

"Windmills" begins with a mysterious chant that seemingly taps into the ancient spirit of Ukraine. The somewhat cinematic opening section leads toward a slow, melancholy drenched black metal buildup that's just as melodic as it is scathing due to Saenko's fluid guitar work and Thurios's wretched vocals, respectively. "November", meanwhile, counterpoints the rest of the album's energy with a slightly menacing undertone while predominantly moving forward an almost romantic quality not far removed from the death doom and gothic metal of The Peaceville Three. The relatively beefy qualities are propped up by Thurios's strong enunciation and Vlad's punchy drum work.

"Till We Become The Haze" is the exceptional album's conclusion and apex, a tour de force of melodic, mid-paced black metal that's incredibly dynamic and impassioned. This is yet another track that pulls from the poetry of Savchenko. The multi-layered track provides the ultimate backdrop for introspection, with just a hint of optimism, clearly representative of the plight of most Ukrainians. The track is subtle and beautiful enough that it would likely appeal to fans outside of the scope of heavy music. "All Belong To The Night" isn't any kind of solution, but it is a clear statement of resolve that the people of Ukraine won't give up until their collective dying breath. Whatever may happen on a larger and more important scale than music, DRUDKH has offered a spellbinding release that can be appreciated by people of any culture and background.