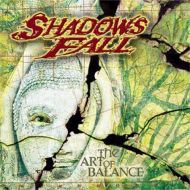 The Art Of Balance

At one time, a band like SHADOWS FALL would've provoked large scale head-scratching and people reaching for their "metal by genre" handbooks in a attempt to put a handle on SF's seemingly disparate elements. Sonically speaking, by era they are quite indicative of the San Francisco Bay Area circa 1982 (all chunking riffs and screaming harmonies on a speed metal tip). Close your eyes, in fact, and you could almost picture them clad in denim, leather and white high-top baseball boots. Ideologically and lyrically speaking, however, it's a very different story, with vocalist Brian Fair enthusing off album about "the oneness and unity between all people and all things." All very much in the spirit of hardcore, very sincere we're sure, and you won't find too many traces of a "Whiplash" or "Strike of the Beast" here.

But then, after all, "crossover" is the done thing nowadays: very much accepted as another form of fuel for the incendiary mosh-pit, but rarely, it has to be said, giving the most aesthetically pleasing results on album. And if SHADOWS FALL are toiling towards becoming kings of all that they survey, then they've still got a way to go yet in this context. All told, nothing could really be deemed totally memorable on The Art of Balance, despite the quintet's best efforts to write spiraling epics in the shape of "Stepping Outside The Circle". As feisty as the likes of opener "Idle Hands" or slow-burner "Destroyer of Senses" are, they're built upon familiar classic metal riffs that, with the modern production techniques stripped away, have been round the block several other times on several other albums. You can't argue with the spirit and verve the quintet inject into every crashing chord — especially the aforementioned Fair and dueling guitarists Jonathan Donais and Matthew Bachand — but there are other times when you'll be clock-watching as songs such as "Mystery of One Spirit" fail to get out of run-of-the-mill metal gear.

A positive curveball is thrown in the shape of a striking, heavied-up version of PINK FLOYD's "Welcome To The Machine", but it would be preferable to be talking about the original material in such a fashion. Hope for the future is certainly evident, but that special spark needs to be found first and foremost.