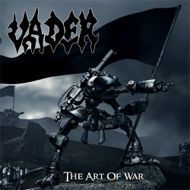 The Art of War EP

The hardest working men in death metal haven't stopped recording and touring to take a break in at least ten years, yet somehow VADER's output never dips in quality. Not every song may be an instantly-memorable classic, but none of their prodigious body of work is anything less than satisfying. Blistering speed, charismatic vocals, rapid-fire riffs with snaking hints of melody in them… VADER is an unstoppable force in death metal.

"The Art of War" is fourteen minutes long, with six tracks, two of which are the sort of ambient intros and interludes VADER loves to throw in. The four songs included here are more than worthy additions to the catalog, though — any doubts that new drummer Daray could fill the shoes of the late Doc (RIP) are dispelled with the opening salvo of "This Is the War". An audio clusterbomb that offers no mercy, this song has all the makings of a live favorite. "Lead Us!" is textbook VADER, with great divebombing lead work and an awesome breakdown, while "What Colour Is Your Blood" reins things in for a crushing midtempo tank battle.

This actually isn't a bad length for a VADER release — these songs are so tightly-wound and intense, too much of them would be numbing after a while, even with VADER's keen sense of dynamics. Parts of songs are sharply (almost clinically) delineated with pauses in the drumming and start-stop riffing, but those respites barely allow the listener to draw breath before launching back into the controlled chaos. They pack a lotta living into a quarter of an hour! (I should mention the included video track, a well-executed if somewhat corny computer animation of some futuristic robot war game.)

"The Art of War" is another impressive outing from these Polish veterans, and it only cements their status as living legends of the scene, on what has to be a record-breaking winning streak, and as vital as they've ever been.