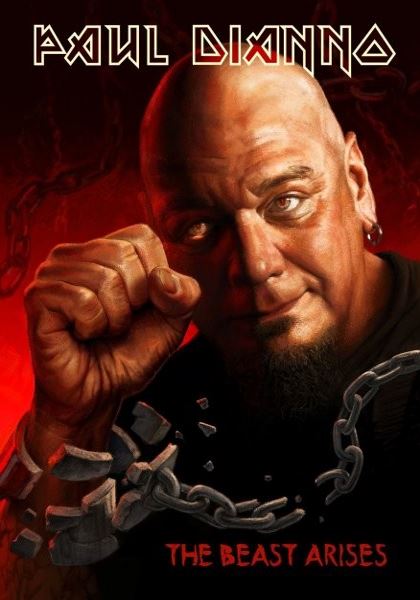 It's never easy to torch a living legend but it's even harder to watch a living legend shank. For all that Paul Di'Anno has endured, positive and negative, he retains a revered spot in heavy metal as the original voice of IRON MAIDEN. This means his live repertoire will forever be stacked with MAIDEN tunes, no matter his other bands KILLERS, BATTLEZONE and GOGMAGOG. With a new KILLERS album reportedly on the way following Metal Mind Productions' reissues of the band's prior catalog, interest in Di'Anno is certainly the highest it's been in years.

Thirteen of the seventeen songs in the set of Di'Anno's new live DVD and CD "The Beast Arises" are IRON MAIDEN tracks, along with the title cut, BATTLEZONE's "Children of Madness" and KILLERS' "Marshall Lockjaw", plus a cover of the RAMONES' "Blitzkrieg Bop". Unfortunately, if you're attracted to this video by the opportunity of seeing Di'Anno rip through old heavy metal classics, you're better off hitting "The History of Iron Maiden Part 1: The Early Days". Truly. It's not a caveat, it's a warning.

Paul Di'Anno is far from his prime, yet he still has the pipes and the ability to knock out "Phantom of the Opera", "Charlotte the Harlot", "Sanctuary" and "Wrathchild" on a good night. Whatever happened when he played the Lizard King Club in Cracow, Poland last year leads one to believe he did it entirely shitfaced—or something. How he signed off the release of "The Beast Arises" is a mystery, because this is a very unflattering performance.

"We're all going to go down in history," Di'Anno says at one point in this set and it's sadly prophetic. "The Beast Arises" does Di'Anno and IRON MAIDEN fans a gross disservice. It has nothing to do with Di'Anno's Polish backing band, consisting of Robert Kazanowski and Michal Wrona on guitars, Artur Pochwala on bass and Dominik Wojcik on drums. They're game enough if a little hyper on the first few songs.

It's hard to pick a point in this set where Di'Anno sounds the worst. What's more embarrassing about Di'Anno's performance on "The Beast Arises" is his spiel prior to "Running Free" where he compliments his own singing. Beforehand, he wallows like a tortured cat on "Phantom of the Opera". Before that, he slogs and slurs through "Killers". Before those, he death growls in the midst of an awful tear through "Murders in the Rue Morgue". All along the way, Di'Anno misfires, warbles, gurgles, burbles and destroys falsettos he normally nails even after his personal toils over the years.

The best-delivered song in the set is "Marshall Lockjaw" and Di'Anno gruffs and muffs that one too. At least the band slays behind him. Di'Anno massacres "The Beast Arises", sounding like he could care less, which is not the case at all. The man is obviously enjoying himself onstage and giving it his all, yet his performance on "The Beast Arises" is, sorry to say, as abysmal as his handling of the MAIDEN tunes, which obviously dominate the set. It doesn't get better with "Children of Madness" as Di'Anno screeches in foiled octaves he might consider striking in the near future.

He ruins "Transylvania" by slagging an emphatic gay musician who purportedly cheesed him off and he changes the title of IRON MAIDEN's instrumental to "Transsexual". Really? Like the ESPN sports segment says, come on, man. At least the band has the sense to keep their traps shut (since they're not great backup singers, either) and they do a decent job covering "Transylvania" and "Genghis Kahn" earlier on.

Despite all the detriments of this set, an upbeat moment comes with Di'Anno's dedication of "Remember Tomorrow" to late IRON MAIDEN drummer Clive Burr. To his credit, Di'Anno pulls things together well enough, even while deferring many of the lines to the audience for a sing-along. In whatever lost state he was that night, it is fun that Di'Anno, a punk singer by nature, took on "Blitzkrieg Bop" as his encore, even if he's as much of a mess handling it as anything in this set.

It's absolute hell having to call out a legend like this. Paul, we're rooting for you, brother, but it's hoped whatever prompted this wayyyyyy off-night isn't repeated, or at least dumped into the market.