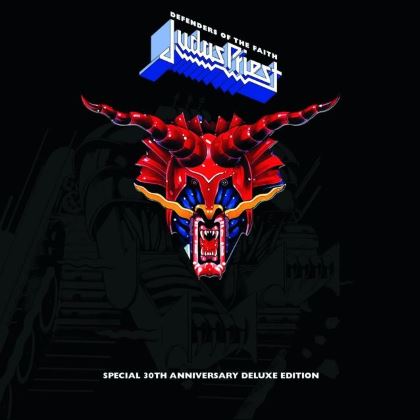 Disc 1: Defenders of the Faith:

Alright, it's a hair late getting to the table, let's get that quibble out of the way. JUDAS PRIEST fans will still want to snap up the "Defenders of the Faith Special 30th Anniversary Deluxe Edition" since this three-disc celebration of the classic album comes with a vintage, fast-pounding concert from 1984 as a bonus.

Widely embraced as a JUDAS PRIEST favorite, it's one of my most-spun discs, not just from PRIEST's catalog, but any heavy metal act in history. I can see myself crashed in my bedroom in '84. "Defenders" was one of my heavy hitter albums then, along with IRON MAIDEN's "Powerslave", RATT's "Out of the Cellar", VAN HALEN's "1984", TWISTED SISTER's "Stay Hungry" and MANOWAR's "Hail to England".

I had one of those felt posters depicting the cover of "Defenders of the Faith" (which you can spot in the 1986 metal-horror flick "Trick or Treat") tacked upon my wall along with a hundred cut-outs from Hit Parader and Circus magazines. This album was on so frequently I can tell you which comic books and Conan the Barbarian novels I read with it cranking, plus the Atari 2600 games I zapped along to it. "Defenders of the Faith" means that freaking much to me on a personal level I'm willing to put it out there in a review of a 30th anniversary deluxe package.

Following the warm reception of last year's "Redeemer of Souls", it's fitting we get to double back to "Defenders" and bask in the hammering "Freewheel Burning", one of the fastest songs PRIEST recorded prior to receiving the double-kicked services of Scott Travis. "Love Bites" and "Some Heads Are Gonna Roll" were two songs metalheads of the Eighties yammered knowingly about to each other in high school, snickering about hickeys and decapitations to the disgust of the straight kids. The more revolted they were, the better, which called for a demonic, upstaging chorus of "Eat Me Alive" in the hallways. "Rock Hard Ride Free", one of our proudest anthems of the day, outdone only by Halford and company's raining mantra of the title track.

Sure, "British Steel", "Stained Class", "Sad Wings of Destiny", even "Screaming for Vengeance" may be superior to "Defenders of the Faith", yet the latter was one of the most dialed-in efforts JUDAS PRIEST ever put their names to. There's still magic listening to Rob Halford blitz his way through those tongue twisters on "Freewheel Burning", as there is savoring the iconic tag solos of KK Downing and Glenn Tipton all over this album. Ian Hill's clanging bass tolls on "Love Bites" are still enough to send shivers of pleasure. "Night Comes Down", still that underappreciated sultry rocker with its swooning chorus and gliding bass lines giving it mystique. Though Dave Holland dug his own grave later in his career, there's no denying his rolls and straight-laced drubbing on "Jawbreaker", "The Sentinel" and of course "Freewheel Burning" kick ass, along with his unhurried but loud march for "Heavy Duty".

Of course, the attraction of owning this anniversary edition comes with the 21-track live set "Live at the Long Beach Arena, CA 05/05/84". For the most part, JUDAS PRIEST belts the songs in this set from the "Defenders" tour out at faster times. Every song from "Defenders of the Faith" minus "Eat Me Alive" checks in. That's unheard of now for heritage bands who seldom risk playing more than four songs from new albums in an effort to appease fans with their favorite cuts.

A lot of the PRIEST live staples (even for 1984) show up, such as "Breaking the Law", "Metal Gods", "Grinder", "Living After Midnight", "Green Manalishi (With the Two-Pronged Crown)", "The Hellion/Electric Eye", "Victim of Changes" and "You've Got Another Thing Coming". What's especially fun is hearing "Sinner" and "Desert Plains" (both held over from the "Screaming for Vengeance" tour) make appearances, even if the latter track's awkward tempo change from the gliding "Point of Entry" original makes it a bit of a chore. That being said, the live portion of this package is still exhilarating from its briskness and no JUDAS PRIEST fan alive will be able to resist pumping a fist upon hearing the Harley engine gun onstage prior to the eruption of "Hell Bent for Leather".

There's a lot of nostalgia involved with my love of "Defenders of the Faith", but it, like "Powerslave", owned my stereo back then and today each still rings amongst the best of the best of heavy metal, not just for 1984, but eternity. Yeah, my words here are biased as all-hell, but from the day I put up that felt-covered "Defenders" poster to the times I conducted individual interviews with Rob Halford, KK Downing and Glenn Tipton, I knew this band and this album specifically would carry through with me for all my time. We grow old, but "Defenders of the Faith" sure doesn't.