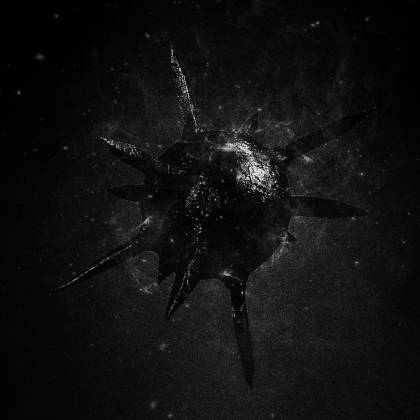 The Birth Of Hateful Existence

01. Intro
02. The Birth Of Hateful Existence
03. Silentium Mortis
04. A Starborn Overlord
05. Trapped by the Event Horizon

A new project from Neptun, former drummer with Slovakian death metal legends NOMENMORTIS, DOMINION OF SUFFERING's debut is one of those low-key, unassuming releases that could easily get lost in these wildly fruitful times. Fortunately, it jumped out at me like a heavily armed stalker.

Like pretty much every death and black metal debut ever, the Slovakian four-piece's first foray begins with a spooky intro: a moment of eerie calm before the inevitable storm. In that and many other regards, "The Birth Of Hateful Existence" conforms to fairly standard notions of an underground extreme metal album, and yet there is something else going on here too. When the opening title track erupts, the riffs are undeniably venomous and dissonant, but there's a subtle weirdness churning away amid the overall roar of sound. The song progresses, mutates, perhaps even warps: a fervently traditional black metal attack, dragged off course by Satan only knows what. Meanwhile, as the song rattles to a beaten, bloody close, a nimble switch from crippling death/doom slurry to white-out blasting has way more impact than you might expect. Within six-and-a-half minutes, DOMINION OF SUFFERING have done more to stand out from the populous hordes of the underground than most in recent memory. "Silentium Mortis" repeats the trick, over slithering, SABBATH-tinged doom, Neanderthal, atonal hammering and clattering, ragged D-beats. These ingredients are unquestionably familiar, but the Slovakians are reflecting those clichés back through a cracked prism of ingenuity.

"A Starborn Overlord" is the finest of these four statements of malicious intent. It meanders into view on a viscous, ambient drone and ghostly strings, before the expected detonation of willful nastiness and flat-out aggression. With that ever-so-slightly askance vision of theirs taking over again, the song's seven minutes are ruthlessly precise but structurally unhinged, as vocalist Quasar's bestial howls spill out over a dense wall of noise that eventually stops dead, leaving only a haunted and haunting church organ intoning to fade. Final track "Trapped by the Event Horizon" casts a similar spell, but with more infernal dirt under its fingernails and a hard-on for speed metal, DARKTHRONE style. It's all absurdly gripping stuff.