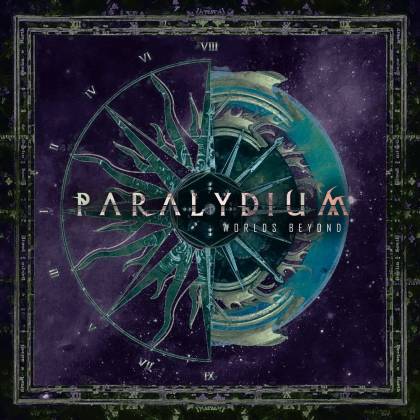 Seemingly out of nowhere, PARALYDIUM have conjured one of the melodic metal albums of the year. Armed with the same rhythm section as fellow Swedes' DYNAZTY, who have already dropped an absolute melodic-ripper this year, this band operate on similar territory, but "Worlds Beyond" is a deceptively unconventional beast. Herein, overwrought balladry, ultra-uplifting power metal and dark, brooding tech-prog wizardry all get a fair share of attention, but the resultant blend is far more absorbing than the potential sum of its parts might infer. Opening track "Within The Sphere" is a brilliantly bombastic entry point, but it's one of this record's more straightforward moments: a palate-cleanser, you might say, in preparation for more extravagant flights of fancy. "Synergy" is where PARALYDIUM truly take off, somehow straddling SYMPHONY X-like crunch 'n' precision and the gleaming melodic rock power FM and H.E.A.T., while cleverly avoiding sounding too close to either one.

Vocalist Mikael Sehlin has a highly adaptable voice, which he delivers with a gravelly snarl where necessary, but otherwise with utmost purity of tone. Metal nerds will already know Sehlin from his work with thrashy melo-death crew DEGRADEAD, but this is the kind of classy performance that will draw mainstream ears too. His PARALYDIUM bandmates have certainly provided him with a thrillingly distinctive backdrop, best exemplified by preview single "Finding The Paragon". The song is an absolute gem, with spiraling, proggy keyboards, electro trimmings and an underlying groove that subtly nods toward the post-djent polyrhythmic. "Crystal Of Infinity" repeats the trick, but with greater economy; four minutes of classic prog metal pomp, but continually subverted with elegant production touches and a hazy but unmistakable sheen of futurism.

Whether intentionally or not, there's great potential for "Worlds Beyond" to appeal to as many post-millennial prog fans as it will to THRESHOLD and DREAM THEATER fans. With that refined melodic bent ensuring that every song is eminently memorable and radio-friendly, PARALYDIUM could hardly be criticized for not covering all bases. "Into Divinity" heads even further into the post-djent realm, but still with myriad colossal hooks and much irresistible slickness.

Just in case you're not grinning by the end of the album, closer "Seeker Of The Light" is one of those gargantuan, lighters/phones-in-the-air mega-epic ballads that will pierce the hardest of hearts, with Sehlin a warm and wide-eyed focal point. It's one of numerous deeply satisfying moments on an album that delivers the goods with aplomb while gently suggesting that PARALYDIUM are only just getting started.