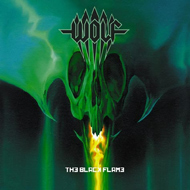 When WOLF first came onto the scene, their self-titled album cover sported a freaky-looking lupine fella, sort of a denim-and-leather Disco Stu as imagined by Maurice Sendak. Musically, the band stuck out like a fistful of sore thumbs, too — the power metal revival was kicking into high gear, but many of its Johnny-come-lately practitioners were long on cliché and short on songcraft. WOLF had both — enough feel-good retro cheese to make them fun as hell, but backed up with tunes you couldn't shake for weeks.

Now on their fourth long-player, the band has settled into a well-worn and welcome groove. Sure, the whole thing is melodramatic and silly — "At The Graveyard" recounts the tale of a conjoined twin, sacrificed so its partner could live, coming back from the dead for revenge, for chrissakes — but WOLF load each of these midtempo anthems with enough tasty guitar work, singalong choruses, and familiar headbanging grooves to warm all but the most cynical metal heart.

Eschewing the gallopy double-kick sort of power metal, WOLF dig into the meatier, more rock-and-roll strain of the beast, coming off at times like an updated SAXON, or a slightly grittier early '80s JUDAS PRIEST. There are occasional nods to MERCYFUL FATE too, never a bad thing (check out the dramatic choruses to "In the Graveyard" and "The Dead", as well as the impressive guitar melodies in the midsection of the latter). Occasionally, the cheap and disposable nature of the project is a little too tacky to ignore, as on the goofy Munsters-esque guitar hook of "Make Friends With Your Nightmares", but you just gotta take WOLF in the intended spirit — this is fun music for people who miss (or missed out on) the old-school melodic metal of the past, nothing more or less.

These days, you can dive headlong into an entire scene of retro-minded metallers who've basically decided to party like it's 1985, with only the slickness of their modern production setting them apart from their influences. If you're picking and choosing, though, you could do far worse than WOLF. At the end of the day, regardless of stylistic trappings, it all comes down to the strength of the songs – and WOLF has 'em in spades. If "The Black Flame" doesn't cause you to break into fist-waving singalongs or air-guitar seizures, then you, my friend, are just not very metal.