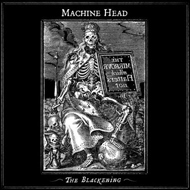 "The Blackening", MACHINE HEAD's sixth studio album, is quite simply the band's best effort since its shattering 1994 debut, "Burn My Eyes", and may even surpass that modern classic. It may also be the best all-out metal recording of 2007. This is a no-holds-barred, brutally heavy, uncompromising album, a labor of love on which every single note of music bleeds with the passion and anger of Robb Flynn and his bandmates. And the music they've created here — eight songs, with two of them passing the nine-minute mark and another pair cruising past ten minutes — is relentless, monstrously heavy and perhaps lyrically darker than anything the band has done before. In short, MACHINE HEAD has made its masterpiece.

MACHINE HEAD — and Flynn in particular — have always been under intense scrutiny since arriving on the metal scene in such unforgettable style with "Burn My Eyes" all those years ago. In the ensuing decade and a half, expectations and commercial pressures seemed to drive everyone a little crazy: the band, its label, and its fans, all of whom seem to be searching for some sort of abstract, undefined height of perfection and success. The frantic overthinking on the still-worthy sophomore album "The More Things Change" was followed by the more market-driven pursuits of "The Burning Red" (which was nevertheless a solid CD) and "Supercharger" (widely acknowledged as the band's lowest ebb). Fifth album "Through the Ashes of Empire" found the group righting the ship, discarding counsel about current music trends and finding its way back to the most pure-sounding MACHINE HEAD CD since the first. Freed of commercial considerations, "Empire" was the best-received MH effort in a while and paved the way for the all-out assault of "The Blackening".

Aside from the first record, this is the ultimate MACHINE HEAD album: it clearly sounds like the work of a band completely following its artistic bent without giving a damn for the consequences. Only that kind of mindset would allow any act to open an album with a track that runs for 10 minutes and 34 seconds. But that's just what MACHINE HEAD has done with "Clenching the Fists of Dissent". The song's haunting, gentle opening soon gives way to an overwhelming barrage of riffs, tempo changes and mood swings, each calibrated for maximum heaviness and impact. The track sets the tone for the rest of the album, with a vibe that veers between fury and despair.

The sonic pyrotechnics continue straight into "Beautiful Mourning" and the literally breathtaking "Aesthetics of Hate", which channels its title emotion into a blazing volcano of pure speed and furious guitarwork from Flynn and Phil Demmel. The fact that the song is driven by Flynn's anger over the media response to Dimebag Darrell's death only adds to its raw energy. "Now I Lay Thee Down" is the closest that MACHINE HEAD comes to easing off the accelerator on this record, but even its slight lean in a ballad-like direction is balanced by its onslaught of slow, ominous riffing.

The incredible barrage of metallic power continues on "Slanderous" and especially "Halo", whose main riff is nothing short of classic MACHINE HEAD. All four members of the band — Flynn, Demmel, bassist Adam Duce and drummer Dave McClain — have not only risen to the occasion on this record, but surpassed themselves, with Flynn and Demmel playing off each other in an intense, dynamic way that Flynn has arguably never had before with any previous MACHINE HEAD guitarist. The fluid playing of all four members and seamless songwriting keeps each song lively and interesting, so that even the most lengthy numbers never feel like they're dragging.

"The Blackening" ends almost where it begins, with "A Farewell to Arms", like "Dissent", addressing the spiraling, catastrophic situation that the once-mighty U.S. has found itself in thanks to its depraved, delusional, war-mongering leadership. But whereas "Dissent" is a fevered call to revolution, "Farewell" is more mournful and accusing: "War hawks and senators they sit tight, so trite/Never their sons will know what it's like to fight/But soldiers are dead/And children have bled/And the silence is numb/What have we become?" Some here on the Blabbermouth message boards have already commented on the political nature of the lyrics, but Flynn's clear, unrestrained feelings on these subjects only add to the sense of artistic freedom and emotional power on the disc.

In a recent span of time that has seen credible comeback efforts from SLAYER and TYPE O NEGATIVE, plus worthy new albums from contenders like LAMB OF GOD, TRIVIUM and MASTODON, it's fitting that MACHINE HEAD — who waged an often lonely battle to keep its identity through metal's ups and downs — have topped them all and set the standard for the next big return to form (we're looking at you, METALLICA). But "The Blackening" is no mere comeback: it's the nearly perfect testament to the musical, personal and commercial journey that MACHINE HEAD has taken and survived all these years, their sound and integrity restored and intact. It's also one of the purest, finest, most powerful expressions of modern heavy metal released in this young but already blackened century.