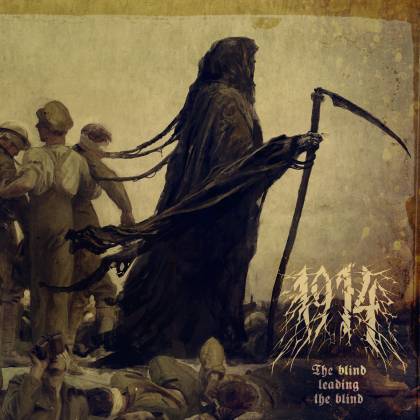 The Blind Leading The Blind

Formed just over five years ago by a gaggle of Ukrainian underground metal veterans, 1914 immediately sound like a band with a bright future. Heavy music doesn't need to be complicated, and this band are not inclined to stray from the extreme metal basics, but there is something undeniably fresh and invigorating about the way they have combined death, doom and black metal to create something subtly but unmistakably new and exciting. It also helps that 1914, as their name suggests, are entirely concerned with exploring the untold horrors of World War I. And yes, we have been here many times before, war's unerring efficacy as a metaphorical and literal lyrical tool being something of a death metal staple. Most recently, ANAAL NATHRAKH's towering 2018 album, "A New Kind Of Horror", brought the grotesque reality of the trenches vividly to life, and while "The Blind Leading The Blind" is very much its own beast, it's a similar conflagration of stoic resistance, mental fragility and bloody insanity that powers these songs along.

It's not hard to see why Napalm snapped 1914 up. From the opening seconds of "Arrival. The Meuse-Argonne" onwards, the band's second album sounds absolutely massive and very much the work of a band with grand plans and heads full of ambition. Not that there are any glimpses of compromise or cynical commerciality on display: songs like the impossibly grand and grinding "A7V Mephisto" pack an absurd amount of sonic heft, often sounding almost symphonic in scale and yet relentlessly, thrillingly gnarly throughout. It's no mean feat to sound simultaneously melancholic and murderous, but 1914 achieve it over and over again. Even a potentially incongruous cover of THE EXPLOITED's "Beat The Bastards" feels entirely justified and in keeping with the album's blistering march toward bullet-torn oblivion. Re-imagined as a hell-for-leather death metal tirade but, in reality, barely altered from the original, it's a welcome reminder that hardcore punk is integral to extreme metal's core instincts. Plus, of course, it fucking rips.

Elsewhere, the scattershot blast-meets-dirge approach bears exhilarating fruit on "High Wood. 75 Acres Of Hell" and "C'est Mon Dernier Pigeon" (incidentally, these titles are quite something!),while chilling centerpiece "Passchenhell" ploughs a dissonant furrow through oceans of crimson mud, funereally slow and oppressive, vocalist Dmytro Kumar belching vitriol from the heart of the battlefield, a guttural specter of death. In contrast, monumentally epic closer "The Hundred Days Offensive" is almost progressive in hue, with a strong sense of dynamics and fizzing tension indicating that 1914's next musical moves may take them into more adventurous territory. But whichever way you slice it, "The Blind Leading The Blind" suggests that this band have the potential to outgrow the underground and make Ukraine a much more visible presence on the global metal map.

And given that this is already six months old, we might as well start getting excited about what this laudably straightforward but weirdly distinctive band will do next.