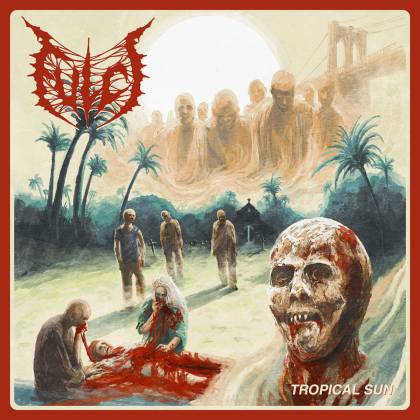 From Ozzy Osbourne's iconic cry, "Oh no, please god, help me!" onwards, heavy metal has always been primarily concerned with confronting horrors, both real and imagined. The genre's close, almost symbiotic relationship with horror literature and film hardly needs restating here, but there is a world of difference between propagating familiar gore and occult tropes and actually tapping directly into the spirit of the horror-bound auteur. On "Tropical Sun", FULCI do the latter with something approaching evangelical zeal.

Plainly in thrall to the warped and wicked works of legendary director Lucio Fulci, this three-piece Italian death metal crew might be expected to run along NECROPHAGIA-like lines, with defiant old school values and gallons of celluloid-shrouded schlock. But the revelation here — albeit only for those of us that foolishly missed the band's 2017 debut "Opening The Hell Gates" — is that FULCI are masters of a very timely and thuggish strain of slamming death metal, more closely related to the marauding fury of CANNIBAL CORPSE and DYING FETUS than to anything more arcane or traditional. Channeling the spirit of classic Fulci movies like "The Beyond" and "The House By The Cemetery" through short, sharp bursts of ultra-violent deathgrind, with numerous mischievous, cinematic embellishments and incidental detours regularly evoking the specter of low-budget terror, "Tropical Sun" is an absurdly entertaining, blood-splattered slam dunk.

To some extent, FULCI play by the rules here: snatches of horror-flick dialogue, spooky synthesizer interludes and an underlying sense of sun-ravaged, voodoo disquiet ensure that "Tropical Sun" flows beautifully from menacing start to bloody finish. But none of this would be particularly exceptional or compelling without great songs and strident personality. It's a credit to the Italians that from the tooth-rattling blast-riot of the opening title track and mid-paced assaults "Apocalypse Zombie" and "Splatter Fatality" to the morbid crush of the closing "March Of The Living Dead", "Tropical Sun" never quite slips into generic violence. Deftly switching from lobotomized pig-squealing and de-tuned sludge to flat-out, hyper-velocity madness, FULCI cover a lot of ground without ever straying from a righteous, gore-obsessed path.

The album's gruesome peak arrives with "Legion Of The Resurrected", a remarkably unsettling death metal diatribe that slithers in on a hazy wave of tropical bongos before employing the war-like grind of prime BOLT THROWER to conjure images of an unstoppable undead invasion. Strip songs like this of their gory, B-movie trimmings and "Tropical Sun" would still be a ferociously compelling death metal record, but FULCI's obvious delight in exploring those all-important celluloid links makes the whole enterprise seem celebratory, joyful and, somewhat ironically, life-affirming. Old-school purists may baulk at some of the band's post-slam affectations, but just like the great Lucio Fulci himself, this six-legged horror machine sound much more likely to eviscerate your still twitching corpse than to give a shit about appeasing one deathly faction or another. Superb entertainment for the whole family (assuming you're the family from "The Texas Chainsaw Massacre"),"Tropical Sun" is just the vacation we blood-hounds need right now.