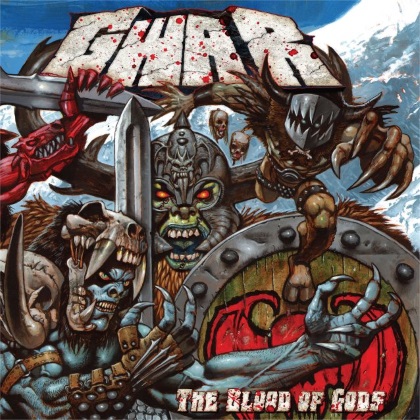 The Blood of Gods

Lemme drop a quick story for yinz. In 2010, I had the wildest, most outrageous interview in my career with the late Dave Brockie, aka Oderus Urungus of GWAR. It was the Sounds of the Underground Tour, and I hopped onto GWAR's steel wheels. Tossing a quick howdy to Beefcake the Mighty, who was entertaining guests while still shedding his centurion's garb from the band's set on the summer festival, I found myself, taking a seat, eyeball-to-eyeball with Dave. Without any of his gruesome latex on, the only way I could tell at the time it was him was to match up his tattoos. After a cordial exchange of hellos, Brockie pointed at my recorder and upon pressing it into action, he immediately went into character as Oderus. In his alter ego's voice, he threatened to have me sodomized and impaled as carrion for the buzzards to peck on; left to rot in the proverbial wastelands where his band figuratively hailed from. A few raunchy Michael Jackson and Paris Hilton jokes later, I had to toss my spiral pad of questions away as I was laughing too damned hard to deliver a straight question. Brockie spooled his hand at me to keep feeding him anything, which I did from the hip, and it became the most ridiculous, hilarious time I've ever had with a musician. We went on for a total of 12 minutes and the second my recorder went off, Oderus morphed back into Dave Brockie, who, in a remarkably even tone, invited me to stay for barbecue.

One man does not a band make, of course, but when Brockie departed this life in 2014 (Cory Smoot three years preceding),nobody would have been offended if GWAR had laid it all down with him. Instead, the survivors gave Oderus's costume a Viking funeral and contemplated their collective future, a band stating on the record numerous times that it would go on even as members died over future years. As the last remaining original member (notwithstanding longtime stage character Don Drakulich, aka Sleazy P. Martini),it's all but unfathomable that GWARshould keep on going. Yet, in the wake of Brockie's death, the remnant members have taken their time to mourn and reconnoiter. The band's resumption includes a memoriam action figure of Oderus from Aggronautix and a new, four issue comic book miniseries, "Orgasmageddon", through Dynamite Entertainment. Not to downplay the tragedy of Brockie's demise, but this multimedia extension is merely the enduring persistence of a rampaging franchise that has already seen GWAR-styled beer, barbecue sauce and board games.

Once more the blood runneth, like a violent swish though GWAR's worldwide toilet bowl, as the group brings its metal-punk Grand Guinol back to the road with a new lead henchman and voice, Michael Bishop, i.e. "Blothar the Berserker". This marks Bishop's first appearance in GWAR since 1999's "We Kill Everything". Establishing himself long ago as Beefcake the Mighty before Jamison Land and Casey Orr, Bishop is now the bearded, antlered pagan from Scumdogia with just as many dirty tricks in his wares as his predecessor. Blothar brings a higher octave with his splattery udder ejections as GWAR pulls off the near impossible on its latest slab of horror-fused, sociopolitical rock, "The Blood of Gods".

Aside from Blothar's bipolar pitch—that takes some getting used to—GWAR strips down (its sound only, thank God) and returns at times to its punk roots. There are a couple of fantastically catchy and conventional rock songs, such as the Alice Cooper-esque, glam-banged "I'll Be Your Monster" and the freewheeling, melodic power rock of "Viking Death Machine". These follow the so-so seven-minute doom march of "War on GWAR", which cannibalizes BLACK SABBATH to the point of annoyance. That being said, the subsequent five tracks—including "Viking Death Machine" and "I'll Be Your Monster"—are awesome.

The single "El Presidente" (you're challenged to guess the target in three tries and likely to get it in one) is a huffing beast of accusatory mayhem with nutty horns, dweeby keys and a round-robin of vocal reveilles, hoisted on-high like a Danny Elfman-peppered punk cabaret. True to GWAR's insurrectionist spirit, "El Presidente" is venomous and funny as all-hell. Indeed, America should be afraid of television wars and truth. If this cut isn't stuffed with enough cynicism for you, hang on for the holy shit incendiary hilarity of "Swarm", made even more pleasurable with the intense hardcore steam of "I Against I"-era BAD BRAINS.

Should it be a surprise that GWAR thrashes madcap on "Auroch" and "Crushed by the Cross"? Probably not, but there's something extra fierce, extra toothy, extra hardcore in these songs, delivered with both precision and spit, not merely serving as heaving vehicles for the band's gory theatrics. Pustulus Maximus's (Brent Purgason) squealing guitar solos on "Auroch" have that added touch of finesse (is that word even appropriate in GWAR lexicon?) as they do on "El Presidente", "Phantom Limb" and "I'll Be Your Monster".

The rollicking "Death to Dickie Duncan" may go down as a future GWAR party hymn, but without a doubt, the album's immediate classic is "Fuck This Place", a tribute to Dave Brockie. Call it a steamrolling rally jam or a true-to-life anthem, "Fuck This Place" is irresistible, not just for having the shits of life, but for those who want a rowdy ride through the pit with a score of F-bombs to rail off their tongues.

"The Sordid Soliloquy of Sawborg Destructo" is uber-geeky, if swabbing the album's sweat level down some. The cover of AC/DC's "If You Want Blood (You Got It) " is by the book, though perfectly at home with a band using it for the right reasons. If anyone has a right to this song, it's freakin' GWAR. To call "The Blood of Gods" a surprise is perhaps doing the rest of the band a disservice, since Mike Derks (Balsac the Jaws of Death) and Brad Roberts (Jizmak Da Gusha) have been holding it down here since the late ‘80s. Still, there's something a bit more urgent to "The Blood of Gods" that has less to do with creating action-packed metal barbarian odes for GWAR's stage carnage. It's not perfect, but it's perfectly scorching when it counts. Bohabs, offer your prayers to Oderus in the great slaughterama beyond: this new order of GWAR is exciting.