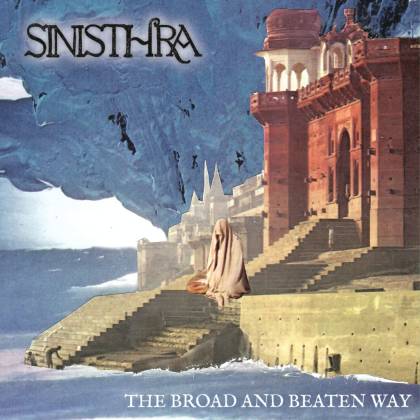 The Broad And Beaten Way

You really don't need to be a fan of AMORPHIS to enjoy the new SINISTHRA album, but it would definitely help. Tomi Joutsen has been one of the finest vocalists in metal for a long time now, and his magnificent contributions to this album can only bolster his reputation as a contemporary great. The Finn was present on the first SINISTHRA album, "Last of the Stories of Long Past Glories", way back in 2005, and so it's only fitting that he should be present here too, as the band is relaunched in fine style.

Purveyors of a lead heavy but unerringly melodic strain of doomy, gothic metal, SINISTHRA were arguably ahead of their time when they first emerged from the ever-fertile Finnish scene. Fifteen years on, "The Broad and Beaten Way" is less a radical departure from the band's early music than a wholesale upgrade, with the additional good news that legions of KATATONIA, OPETH, SWALLOW THE SUN and even EVERGREY fans are primed and ready to embrace this whole thing with alacrity.

Guitarist and chief songwriter Markku Mäkinen has beefed everything up considerably, both in terms of guitar tone and via a gnarly edge to the riffing, but this is still heavy music bathed in melancholy and delivered with great finesse. Joutsen's vocals are an added bonus, of course, and it's particularly thrilling to hear him singing with such natural abandon, taking a more soulful and nuanced approach than he generally does with AMORPHIS. Consequently, "Closely Guarded Distance"'s epic and superficially bombastic sprawl feels much more intimate and emotionally supercharged than it should: 13 minutes of soaring melodies, doomy detours and torch-song elegance, it's a compelling blend of the familiar and the alien, the pounding and the progressive. It's preceded by "Eterne", a surging, teary-eyed anthem that shares textural DNA with fellow Finns SENTENCED and has one of those nagging, irrefutable choruses that will haunt you for months.

Clearly, SINISTHRA know their way around a tune, and as an entry point, "Eterne" is immaculate. But it's the more adventurous moments on "The Broad and Beaten Way" that will make discerning music nerds crave for more of this stuff in future. "Halfway To Somewhere Else" is beautiful, bluesy and wonderfully restrained; a glacial, post-rock ballad, bathed in shimmering strings and astral glimmer. "Morningfrail" evokes the specter of arty, synth-driven '80s rock, interspersed with bursts of metallic thunder and enormous, uplifting, anthemic refrains. "Safe In The Arms of Everlasting Now" could be the best of the lot. Dense with melancholy and soporifically slow, it's a sparkling showcase for Joutsen's dynamic prowess; with another grand and stirring chorus and a final, rowdy crescendo that gives way to the delicate pathos of closer "Ephemeral", wherein Joutsen croons across Mäkinen's graceful picking to blissful effect.

All in all, it's a profoundly classy album, with one of heavy music's finest vocalists doing all kinds of great things to his own legacy. Meanwhile, one of Finland's most underrated bands have finally bloomed into something special.