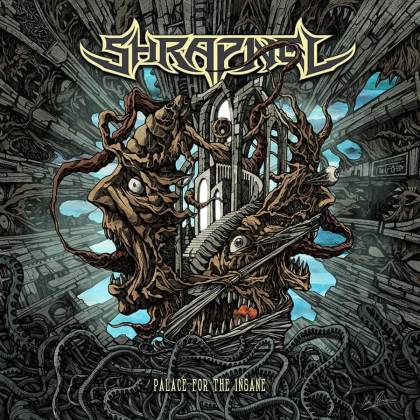 Palace For The Insane

It is probably due to British thrash metal's failure to ever produce a world-beating band that SHRAPNEL have yet to truly register on the global radar. In terms of quality, you may find it hard to fault anything the band have released to date: both 2014's "The Virus Conspires" and 2017's "Raised On Decay" were furious, high-grade examples of ripping modern thrash, very much from the EXODUS, KREATOR and NUCLEAR ASSAULT school of intensity and deserving of far more attention than they received. The same fate could easily befall "Palace For The Insane", but the exhilarating reality of SHRAPNEL's third full-length is that the band have undergone a holistic overhaul, resulting in one of the most beastly and bellicose metal records you'll hear this year. Founding members and guitarists Chris Martin and Nathan Sadd are joined here by returning original drummer Chris Williams and new vocalist/bassist Arran Tucker, and the resultant explosion of chemistry and creativity is breathtaking. Tucker is an absolute revelation throughout this remarkable record, stamping his identity on these frequently adventurous songs and sounding not unlike a baritone hybrid of Chuck Schuldiner and Tom Araya.

From opener "Might Of Cygnus" onwards, it's evident that SHRAPNEL have expanded their modern thrash vision to allow a lot more space and experimentation within what are otherwise spiky, brutal and tightly structured metal songs. All the classic thrash tropes that fans of the genre demand are here, of course, and few modern bands play them with SHRAPNEL's levels of conviction, but it's in this album's more exploratory moments that the brilliance of their reshuffled line-up becomes apparent. Observant metalheads will already have heard "Might Of Cygnus", with its epic, ominous intro and crushing, six-minute riff bombardment. "Begin Again" is even more grandiose, shimmering to life through a distinctly PINK FLOYD-like haze, before erupting into more destructive riffing. Similarly, "Future Sight" is a dark and brooding affair, delivered at a crunchy mid pace and bolstered by ragged but mesmerizing vocal harmonies.

SHRAPNEL have certainly touched on these varied tempos and moods before, but on "Palace For The Insane" they sound fully convinced of their own mastery of thrash as an artform. Even the more straightforwardly pummeling likes of "Cannibal" and "Violent Now, Forever" are more distinctive and memorable than anything the band have done in the past, while the closing title track is simply one of the best thrash metal songs in recent memory, snarling salutes to Satan included.

With killer new albums from TESTAMENT, HOLYCIDE, HAVOK, SEPULTURA and several more, 2020 has already been a great year for thrash. You can add SHRAPNEL to that list without hesitation, preferably somewhere near the top. The British thrash metal dream lives!