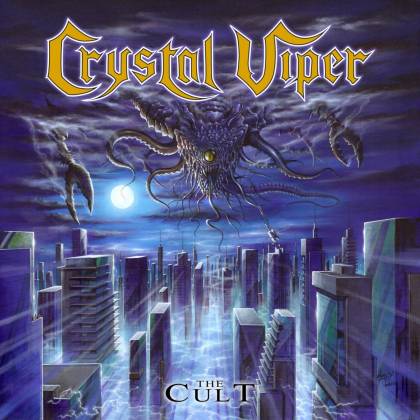 Poland is known more for its contributions to heavy metal's more extreme ends. Its landmark bands in the black metal and death metal genres are plentiful. The fact is that there are still also numerous Polish bands paying tribute to metal's more traditional sounds. CRYSTAL VIPER is now over a decade into their existence, and for the duration of that time, have proudly flown the flag for the power and speed of heavy metal's yesteryear. The group's latest record, "The Cult", is fueled with fist-pumping adrenaline and shred-tastic riffs, but the repetition of the group's approach does drain listening energy a bit by the end.

The one constant since the group's early beginnings has been the vocal presence of Marta Gabriel. From the title track, and record opener's early moments, Gabriel — also the primary songwriter — soars to the highest heights of the air-raid siren registers. Every song is crafted to show off her vocal abilities, and those efforts have become a trademark of CRYSTAL VIPER's sound. The title track sets the stage for the bulk of the record, with Gabriel administering a triumphant battle cry over a galloping display of power riffs and melodic guitar solos.

"Whispers From Beyond" sees the album transitioning into a mid-tempo power metal machine. Gabriel's vocals settle into a lower, raspier register for the body of the song, with the highest of the highs restrained for the wonderfully layered chorus's finishing stretch. With these first two proper tracks, CRYSTAL VIPER shows that they have mastered both speeds of traditional metal displayed so far. But the rest of the album only really sees those two variants on display, and save for a few very bright spots, the faster-paced songs seem interchangeable with each other, as do all of the mid-tempo tracks on the record. Short of arranging everything into a fast-paced A-side, and a slow-paced B-side, one could press shuffle on the tracks and the overall listening experience likely wouldn't change too much. And by the end of the album, Gabriel's vocals that set the record off to a furious start seem a bit numbing.

That's not to say that there aren't individual moments along the way that rouse genuine enthusiasm. The aforementioned title track does a lot of heavy lifting in establishing a high bar for CRYSTAL VIPER's more ripping tracks. "Sleeping Giants" is a catchy burst of mid-tempo power metal, with Gabriel showing off her purest singing performance of the record and saving the siren call for the song's peak emotional moments. One aspect of the band's sound that remains truly impressive from start to finish is the beautifully crafted guitar solos, which are delivered by Gabriel and fellow guitarists Andy Wave and Eric Juries with the absolute perfect balance of technical shred and traditional heavy metal melody.

It cannot be denied that CRYSTAL VIPER delivers their bursts of metallic glory with power and conviction. As the final moments of "The Cult" come limping across the finish line, one realizes that at some point, there needs to be something a little more dynamic.