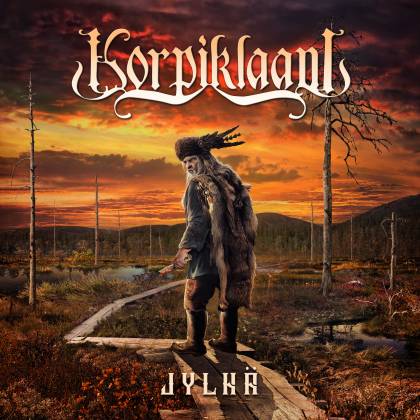 It's not unreasonable to be on the fence about bands like KORPIKLAANI. On one hand, the Finns are an unstoppable, beer-sodden force for cheeriness and collective uplift. On the other, their trademark folk metal brew could easily seem a bit too fucking cheerful, especially in the midst of today's ongoing clusterfuck of disasters. If you find yourself leaning toward the latter philosophy, I would still recommend exposing yourself to "Jylhä" in its exuberant, explosive entirety. Always heavier and more diverse than their goofy public façade suggests, KORPIKLAANI have created an album of nourishing substance here; a self-evident career peak with anthems galore, but also with hidden depths and numerous stylistic surprises. The same could be said about 2018's sprawling "Kulkija", of course, but that record meandered where this one bulldozes.

One easy way to spot how confident a metal band are feeling is when they manage to incorporate reggae into their sound without skipping a beat. First single "Leväluhta" does exactly that, and it works brilliantly; a loose-limbed, laidback gait suiting KORPIKLAANI's irresistible air of bonhomie perfectly, while the chorus is as ferocious and celebratory as anything in the band's sturdy catalogue. In contrast, a song like "Tuuleton" reveals a more progressive edge to the Finn's music, still with a giant chorus of course, but with dynamics and detours that belie folk metal's somewhat narrow reputation. Both the windswept "Kiuru" and epic closer "Juuret" exhibit similar levels of adventurousness, as a melancholier and more urgent KORPIKLAANI emerges from pristine swirls of dark riffing and the usual blizzard of effervescent accordion and fiddle.

It's a testament to the durability of this band's formula that "Jylhä" sounds so fresh. To some degree, KORPIKLAANI haven't changed a huge amount in 20 years, but even when in straightforward singalong mode, they sound newly invigorated and thrilled by their own mad ideas. As with fellow countrymen FINNTROLL, Jonne Järvelä's veteran crew have always had an incredibly strong and idiosyncratic musical vision: oft copied, but rarely matched. On the hook-filled and stirring likes of "Sanaton maa" and "Pohja" — the latter, a particularly mosh-friendly heavy metal hoedown — they have simply upped their songwriting game, delivering the expected rush of folksy melodies, but with more bite and bombast than ever underpinning it all.

And yes, there are several moments on "Jylhä" that will present a robust challenge to scowling cynics. KORPIKLAANI still have that irrepressible, hands-in-the-air, folk metal thing going on. Whether it's "Huolettomat" — a perfect, riotous example of the form — or "Anolan aukeat"'s sweetly mournful waltz, the sincerity and warmth of these boozy vagabonds is near impossible to miss. Also, as an aside, extra marks are awarded for the neat bluesy guitar licks at the beginning of the bug-eyed and skanking "Pidot": one of countless inspired touches, on an album that might just be the tonic we all need.