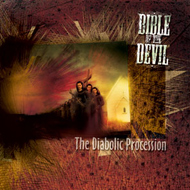 BIBLE OF THE DEVIL

Right out of the starting gate, Chicago's BIBLE OF THE DEVIL parties like it's 1979, tossing out galloping moon-boot riffs like candy off a parade float and singing about ridiculous shit in the most earnest voice since Paul Stanley's. Like some demented bastard child of KISS, RIOT, PENTAGRAM and the New Wave of British Heavy Metal, these guys evoke the same deliberately musty blacklight-poster vibe of like-minded labelmates SLOUGH FEG and sardonic twin-lead sickos BOULDER.

Want more reference points? The first two MAIDEN records (especially some of those cool low-mixed harmonies),OMEN, CIRITH UNGOL, anything with Jack Starr involved… basically, this is denim-and-leather metal done with the reverence to make it sound killer, and just enough grit to make it sound authentic. Goofy tempo changes abound, as do riffs just dripping with melody and solos that'll peel paint, and it's all done with a wide-eyed exuberance that, thankfully, never descends into self-aware ironic parody. These guys play it like they mean it, rock and roll first and foremost, their classic metal influences tempered by years of constant shithole gigging, and the sweat and spit of the live show comes across here. This isn't someone's studio joke band to get their retro jollies, this is the real deal!

Highlights include the urgent, galloping "Legions of the Oriflamme", the epic "Slaves" and "Heinous Corpus", a song dripping with midtempo pathos and the sort of vocal line Matthew Barlow of ICED EARTH used to sink his teeth into so well. Really, though, there's not a bad moment on the album, just plenty of unhyphenated heavy metal pleasure. BIBLE OF THE DEVIL traffic in timeless metal, and unlike so many of their backward-thinking peers, they actually get it right — they're real men, they play on ten. What else do you need to know?