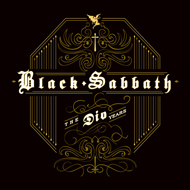 Few debates make me as nauseated as the one concerning the worthiness of the Ozzy Osbourne versus Ronnie Jame Dio BLACK SABBATH lineups. While it is true (in my mind) that the Ozzy-era lineup cannot be touched from the standpoint of musical trailblazing and the writing of legendary tunes, to say that the Dio years (specifically 1981-1983) were somehow sub par or unremarkable is just silly. The music created by each lineup should be evaluated on its own merits. The main point of commonality is that both lineups can boast producing some of the greatest heavy metal songs of all time.

And so we have "The Dio Years" to debate and dissect. Tracks one through nine are taken from "Heaven and Hell" and "Mob Rules". Few would argue that the best tracks from both albums have been included, the conspicuous absence of "The Sign of the Southern Cross" from "Mob Rules" notwithstanding. Perhaps the biggest difference between the discs concerns a much bigger riff sound on "Mob Rules", while "Heaven and Hell" has a certain quiet elegance (generally speaking) compared to the thunderous delivery of the 1981 release.

Song-wise, the "Heaven and Hell" material commences with the up-tempo "Neon Knights", an absolute killer! And who doesn't love Geezer Butler's opening bass line on "Lady Evil"? The explosion of speed and fury that occurs after Geoff Nichols' keyboard intro subsides on "Die Young" is amazingly powerful. The tune rages with speed and fury until the sparking keyboards and Dio's soft vocal section on the chorus hits. The tune then blasts off again and Iommi slays with a solo. The recognizable riff on the title track approaches the legendary status of "Iron Man" and "Smoke on the Water" (I know, not quite, but you get the gist) and the epic song is an all-time great, hands down. "Lonely is the Word" closes the "Heaven and Hell" album with grace and beauty, a different kind of heaviness defining the slow tune. The version of "Children of the Sea" from "Live Evil" was the best choice for a live cut, as it comes off particularly well and stands as another of the Dio years' greatest contributions to metal. The mid-section bass playing against Iommi's melodic leads (and eventually brief and ripping solo) and Nichols' choral keyboard effect is stunning.

The sonic weight and aggressiveness of "Mob Rules" is heard right from the start of Iommi's whirlwind riff on "The Mob Rules" and Dio's hair-raising scream of "Ohhhhhhh, come on!" And if the rather hypnotic riff and rhythm of "Voodoo" doesn't put a chill in your bones, then you're just not getting it. "Turn up the Night" is right up there with "Neon Knights" and features a great wah-pedal effect on the chorus. The Butler/Appice rhythm section attack on the song shakes foundations. "Falling off the Edge of the World" is the album's answer to "Die Young" in the way that it begins with a light, spooky introduction with Dio's hushed tones before launching into a riff tornado and fast-paced delivery.

Iommi welcomed back Dio for 1992's "Dehumanizer" after a string of largely ignored, but to some degree underrated, albums subsequent to 1983's "Born Again". Most will be surprised that "Time Machine" was left off this compilation, but the songs included are representative of the album as whole. The great melody and creepy vibe of "After All (The Dead)" is a gem and, along with the nearly as strong "I", sounds closer to a DIO album compared to the music heard on "Heaven and Hell" and "Mob Rules". The balls-out rocker of the trio is "TV Crimes"; it is no "Neon Knights" or "Turn up the Night", but is still a strong track in it own right.

The three new songs (with Appice on drums) are respectable and, for the most part, more in line with the "Dehumanizer" material. "The Devil Cried" and "Shadow of the Wind" are doomy plodders with fat riffs. The latter is the best of the three from an overall arrangement standpoint. One can even hear a faint "Heaven and Hell" vibe in parts. "Ear in the Wall" is a typical SABBATH rocker that gets the job done even if it does not reach the level of the 1980-81 material.

As for the rating, if we're talking only of the material from "Heaven and Hell" (including the live rendition of "Children of the Sea") and "Mob Rules", then the album is an easy 10. Opinions vary on which album is better, but there is no question that they are terrific heavy metal albums. Maybe you rate one a 9 or a 9.5 and the other a 10. Does it really matter? The "Dehumanizer" selections are damn solid too, but do not approach the greatness of the music on the aforementioned albums. And while it is nice to hear three brand new selections, few will be blown away. Are they good Dio-lineup BLACK SABBATH numbers and better than much of what passes as traditional heavy metal nowadays? Absolutely, but let's not get blinded by nostalgia. You can't go wrong with plunking down the bucks for "The Dio Years", but if you really want to know what that lineup was all about, then pick up "Heaven and Hell" and "Mob Rules". While you're at it, catch one of the HEAVEN AND HELL live performances.