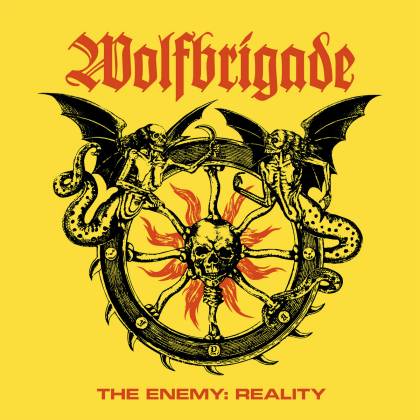 Legendary Swedish D-beat stalwarts WOLFBRIGADE — the artists formerly known as WOLFPACK — have been hacking away at the chopping block for nearly a quarter century now, aside from a couple of periods of hiatus. Much like many long-running acts, the Swedes have undergone several lineup changes. But WOLFBRIGADE has gelled around a consistent vision and remained steadfast in their collective pursuit of achieving it. The unit's latest effort, "The Enemy: Reality", is reliable in terms of quality and consistent as far as the unrelenting trek along their well-established trajectory.

The song remains the same, and in the best way possible. WOLFBRIGADE remains succinct in its delivery of bruising crust and rapid, hyperspeed hardcore. The no-frills, no-nonsense affair eschews any kind of pretentious meandering in favor of deliberate stabs of punk-fueled passion. "The Enemy: Reality" is less than a half hour long, in fact. The only evolution of the last decade has involved a healthy dose of rock 'n' roll groove in the vein of MOTÖRHEAD.

And "The Enemy: Reality" continues along the expected path right from the get-go as opener "Sum of All Vices" rumbles forth with a vibrant and triumphant sense of surging D-beat glory. "Fire Untamed" follows suit with a caustic thrash 'n' blast approach that perfectly matches the intensity of Mikael Dahl's massive vocals. His voice is so potent that, at times, it's hard to believe it's coming from a human being. Similarly, and built upon a foundation of thunderous percussion and off-kilter, slicing guitars, "The Wolfman" steamrolls with a frantic sense of urgency that would lead you to believe that they're playing the song as though their lives depended on it.

One of the most distinguishing features of WOLFBRIGADE's music is how authentically angry and unhinged it all sounds. Songs like "Narcissistic Breed" and "Doomsday Dominion" are some of the most vitriolic of their career. And it sounds so good. It's angry, but there's a swagger that's simply undeniable, because the band understands the value of writing music with hooks.

"The Enemy: Reality" is a fantastic album from a band that regularly releases world-class material. WOLFBRIGADE's members aren't getting any younger. That makes it so much more impressive: they're playing a young man's game and delivering the music with as much fervor as they always have, and that's more than what you'll hear from similar artists who are half their age. Only time will tell how long WOLFBRIGADE can keep this up. But if "The Enemy: Reality" is any indication, they won't be slowing down any time soon.