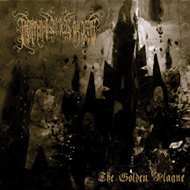 Coming to you from Los Angeles, LIGHTNING SWORDS OF DEATH clearly have no qualms about keeping their old school influenced black metal punishment raw and cutting. The disc has nothing pretentious about it, nor does it come off as some veiled attempt to jump the black metal bandwagon. A spotty production does hurt the effort though.

Changing up pace nicely and keeping the tunes rolling down the tracks like a smoke-chugging locomotive, one can tell that LIGHTNING SWORDS OF DEATH has more than a passing fascination with vintage metal masters like VENOM (in feel, if not musical delivery). In fact, several parts have the kind of crank-the-amps-to-10-and-go-for-it vibe of a LAIR OF THE MINATAUR, an emphasis on the mighty riff of paramount importance. You'll hear it on songs like "Shores of Twilight" and "Abomination in White", although one would never mistake LIGHTNING SWORDS OF DEATH for the Chicago trio. The last section of "Ghost of a Thousand Broken Blades" features a doomy, keyboard-created segment to close out the album. Vocally, we're talking in terms of the kind of snarling rasp you might hear on an ANGELCORPSE or even IMMORTAL album. The songwriting is generally solid, if not mind blowing. There is some damn delicious riffing and thunderous drumming going on here for sure.

Raw, sometimes even lo-fi, production values are not something that turn me off, especially for this kind of black metal atrocity, but the mix on "The Golden Plague" is a tad flat. A slight improvement would have really brought out the power of these tracks. Beef it up a little next time and the result should be a much more hellish experience. Still, "The Golden Plague" is a fairly tasty slice of black metal pie, enough so to make me curious about what the band may bring to the table on the next release.