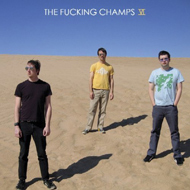 What a nice change of pace "VI" by San Francisco's THE FUCKING CHAMPS has been. For those unaware of the existence of the trio ("VI" is in fact my first exposure to the band),the act has been in existence since 1992 and prides itself on finely honed instrumental rock/metal albums. But "VI" is not the kind of instrumental album a band like PELICAN would write; epic-length songs and dreamy soundscapes are nowhere to be found. Rather, "VI" is about rock music with an emphasis on rock (with a significant metallic factor). Two guitars (of various types),smartly incorporated (and never overused) synth, and drums are the tools of THE FUCKING CHAMPS' trade and will probably surprise even those who tend to kick instrumental albums to the curb.

Whether it was the first time or the fifth time listening to "VI", I found the act's compositions to be thoroughly enjoyable every time and never was I bored with any of it. The interplay of Phil Manley (six- and nine-string guitars, acoustic guitar, piano, bass guitar synth, synthesizer) and Tim Green (guitar, baritone guitar) is fantastic, the unit moving as one and playing off each other's parts expertly. Drummer Tim Soete is also credited with guitar (as well as synthesizer),but I couldn't tell you anything about the magnitude of his role. The material not only keeps you interested, but also keeps you moving, and a great deal of it rocks like hell. Just listen to "A Forgotten Chapter in the History of Ideas" and "Fozzy Goes to Africa" and you'll hear exactly what I mean. Both include a superb alternation of hot riffs and ass kickin' sections with melodic, lighter, and intricately picked parts. In addition, there is a metal riff in "A Forgotten Chapter in the History of Ideas" is just plain bad to the bone. The introductory section of "Abide with Me" is a direct descendant of Brian May's (QUEEN) '70s output. In fact, there are many references throughout the album to acts like THIN LIZZY and QUEEN that the trio melds wonderfully into its compositions. Shades of LED ZEPPELIN are heard in the synth/keys parts of the mellow, acoustic number "Dolores Park".

It is not as though "VI" has revolutionized the art of the instrumental, nor do I think it is a landmark release. What I do think is that "VI" is a good hard rock album and the fact that it happens to be an instrumental disc is irrelevant to the veracity of that statement.