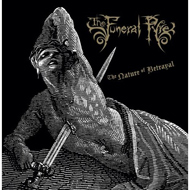 The Nature of Betrayal

If it seems like THE FUNERAL PYRE's "The Nature of Betrayal" came out last year some time, it is because it did come out last year on Creator-Destructor. In keeping with Prosthetic's inclination as of late to release more metal and less 'core (ala INFERNAEON and GOJIRA),the label recently re-released this collection of melodic black metal tunes from the Los Angeles band. All in all, it was a wise move on Prosthetic's part, as "The Natural of Betrayal" possesses most of the requisite elements of quality European black metal mixed with the cross-pollination of black and death heard from bands like DISSECTION.

There is more positive than negative going on here. On the upside, the black metal licks are competent and often rather incendiary, even if in some cases the result is less than distinguished from a variation standpoint. In the way of minor nitpicking, I did find the tone to have a slight 'core element to it, which would be fine if THE FUNERAL PYRE was a metalcore act. But there is no reason to get hung up on tone, as it is of minor consequence. The use of keyboards across the album is well done, emphasizing accent, atmosphere, and in some cases melody lines, rather than symphonic bombast. "Stealing the Air of Life" succeeds largely because of its keyboard-led melody, one that is both enchanting and cold, but also because of the slow pace characteristic of the bulk of the track; the tune does blast off somewhere around the middle of the seven-minute cut before returning to a more relaxed pace. The general rip factor on several songs is what reminds to some of extent of Swedish melodic death metal (including the occasional growled vocal to go with the harsh screaming),and even bits and pieces of what is heard from THE BLACK DAHLIA MURDER.

I suppose I am not as impressed with the album compared to some of the critics that had praised the band prior to the Prosthetic signing, but I do find "The Natural of Betrayal" to have a lot going for it. Mainly, the overall "feel" of the disc didn't grab me as much as I would have liked. It is a bit of a grower as well. Overall, the album is a worthy effort for a band with a lot of promise in the U.S. black metal scene (though I've yet to locate a true "scene" on this side of the Atlantic).